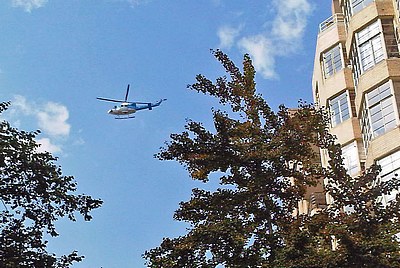 Wondering what the racket was this afternoon? A police helicopter hovered low over the Heights as a flight of Marine Corps choppers, one of them carrying President Obama to his speaking engagement in Manhattan this evening, swooped down over the Buttermilk Channel and landed at the Downtown Heliport.

Update: Yesterday I thought the helicopter noise was particularly loud just before I grabbed my camera and ran outside. Later, the doorman told me that some people were on the roof deck of our building (57 Montague) enjoying the nice weather when the police chopper descended directly over our roof–to within about twenty feet, according to what they told the doorman–to get a look at them and make sure they weren’t up to anything bad. Watchful indeed!

This reminds me of an incident in 1988, a couple of days before Reagan and Gorbachev had a summit meeting on Governors Island. My office in downtown Manhattan had a view of the East River and the Heights. As I was sitting at my desk, I saw from the corner of my eye something flying low over Brooklyn. It was a C-135, the Air Force version of the Boeing 707 jetliner, flying over the Heights at about 500 feet. It turned and circled around, passing over again on a slightly different course, and repeated this several times. It must have been an aerial survey to determine from where someone might be able to get a shot, say with a small shoulder-launched missile, at the site of the meeting or at the arriving helicopters.

No parking at Riverside Garage?
Mr. Junkersfeld’s Neighborhood and Beyond