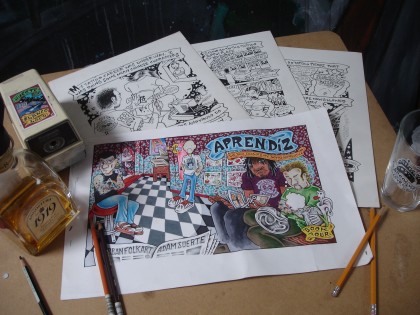 LISTEN TO THE NEW HOMER FINK SHOW with Suerte now at Blogtalk Radio.

BHB pal and Brooklyn Tattoo owner Adam Suerte will be celebrating the launch of  the final installment of his Aprendiz graphic novel at Rocketship Friday night (7/3)  starting at 8pm.   The books chronicle Adam’s journey from art school grad to one of the most respected tattoo artists in America.   They’re pretty great, you should check ’em out!

And now the details straight from Suerte:

10 years ago last April 1, I started an apprenticeship in tattooing that would last a year, and propel me into the world of tattooing. This experience has forever affected all aspects of my art, my thoughts on anatomy, and the responsibility of leaving lasting marks on people for the rest of their lives. I have been documenting the year long apprenticeship I served in graphic novel form, one chapter at a time. The first chapter was nominated for a Ignatz award in 2002, and later the series was nominated for a Hanley award (given by the comic shop Jim Hanley’s Universe under the Empire State Building). I have finally finished the last one and Rocketship has been generous to host the final release party for this episode. Being that I grew up in this neighborhood, I couldn’t think of a better place to celebrate. I told the owners that although I am not a heavy hitter in the comics world I do have some local cred (right?). I promised I would bring in some people that might not normally step into a comic shop on the regular, and then again, some that do. Help me keep my promise and stop by. There will be door prizes hidden in some of the books, anything from schwaag to tattoo gift certificates. Come on down, there is something in the shop for everyone, comics are a magical beast.