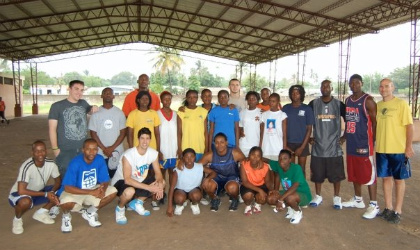 >> The group gathers in their new basketball court; Shahum is the one in the bright blue shoes (photo courtesy Cho)

Here’s a happy story for your Wednesday afternoon:

By day, nine-year Heights resident Brian Shahum, 30, is an insurance claims manager at AIG’s international wing — but, two years ago, he realized he wanted to do something more. So, utilizing the insurance giant’s corporate matching charity program, he has raised nearly $7,500 in the last few years to help build basketball courts in Mozambique.

Shahum is a lifelong basketball player — he left law school to play professional basketball in Lebanon — and practically preaches the sport’s social and educational benefits. Most notably, he said, “Playing basketball gives you discipline, teaches you about life [and] about winning and losing, and it lets you relate to anyone who plays it.”

So last year, Shahum reached out to a friend he’d met through the Basketball City league to see if they could play, but it turned out the friend — Marshall Cho — had moved to Mozambique and was starting a Hoops4Hope chapter in his town, Xai Xai.

Shahum knew he wanted to help.

He started small, sending over boxes of basketball jerseys, shoelaces, shorts, t-shirts, whistles, basketball nets, and school supplies. But he still wanted to do more.

“Basketball has done so much for me and I know it will help these kids,” he said.

So Shahum sent out emails to friends and family and raised $3,000, which AIG matched dollar for dollar for a total of $6,000. Shahum was so happy with the results that he sent around a second round of emails this spring, trying to get to $1,500.

In April, Shahum finally had a chance to travel to Xai Xai and check out the court he helped build.

“It was an amazing experience,” Shahum said in an email. “Not only do kids now have a place to play, but a community has a sense of pride.”

Ever modest, Shahum said he’s just trying to do his part to help the world move forward. During his trip, Shahum the best parts weren’t playing basketball or coaching the kids, but, most importantly, “Letting them know that I wasn’t just a name on a backboard but just like them, a ballplayer.”

And yet, the fact that his name is emblazoned on the backboard — it says, “Thank you, Brian,” or “Obrigado Brian” in Portguese — was not lost on many of the kids there.

At one point, a six-year-old boy asked Shahum for his name. The kid ran off upon getting his answer, but quickly returned, looked up at Shahum, and pointed to the backboard. “Brian?,” he said. “Si, Brian,” Shahum responded.

“He started hugging me, [and] what a feeling that was — indescribable,” Shahum told BHB. “That was a real high, something I’ll never forget. I am nobody special; I just love basketball and helping people. Basketball has given me so much in life, and this was just a chance to give back.”

All the money that Shahum raises is put back into the community by buying local supplies, and hiring local workers for court maintenance. But, Hoops4Hope always needs more money for routine maintenance to the court, Shahum said. AIG scaled back its matching grant program due to the economy, but Shahum still has hope he can send down more money.

“So far, I am getting very close to having raised the $1,500, but anything above would be fantastic as there is such a need down there,” he said.

Cho posted more pictures and videos from Shahum’s trip — including ones of basketball games, drill sessions, and the court’s construction — on his Facebook profile here and here. In the meantime, here is Shahum and Cho in front of that backboard: 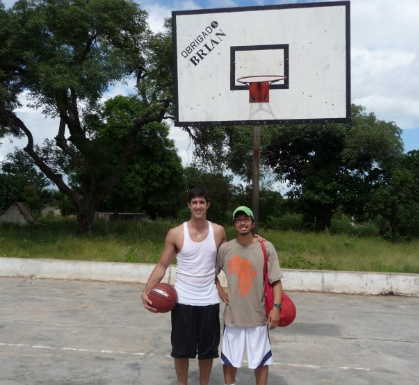