Brooklyn Folk Festival Off to an Inspiring Start

The Brooklyn Folk Festival, presented by the Jalopy Theatre and School of Music at St. Ann & the Holy Trinity Church featured a sparkling and eclectic program of music tonight. Nashville’s Megg Farrell (photo above) and her band had festivalgoers clapping and dancing in St. Ann’s Parish Hall with some lively rockabilly. 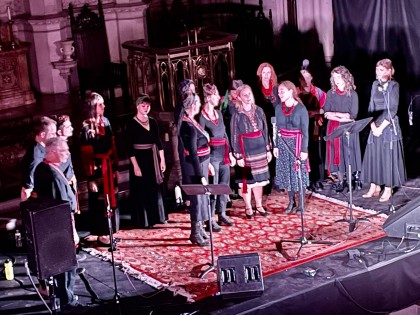 The opening act for the performances on the main stage in St.Ann’s sanctuary was the Ukrainian Village Voices, a choral group based in New York’s East Village, home to a large Ukrainian American community. They opened with several traditional wedding songs, all of which ended with a loud “Ooooh!” A timely inclusion, although from years ago, was a song by a son about to join the Army, whose mother assures him, “You’ll be back in three years.” They finished with a rollicking song about drinking together. I knew someone whose ancestry was half Irish and half Ukrainian, and he said the two sides got together nicely. 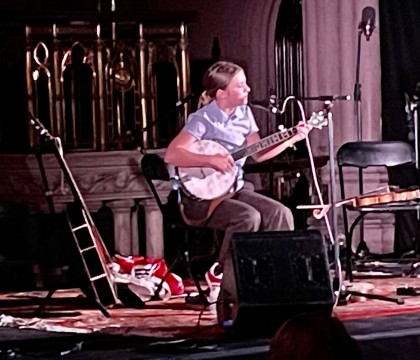 Brooklyn’s own Nora Brown performed some traditional Appalachian and Western ballads, some instrumental and some with voice, showing her skill with banjo, guitar, and as a singer. I knew her first as “Little Nora Brown,” a child prodigy on banjo. She’s now a very accomplished young musician.

There’s much to come on Saturday and Sunday. There’s a full Festival schedule here; you may buy tickets here.