Brooklyn Poets Finds Its Home at 144 Montague St. to Welcome All to Writing Workshops, Open Mikes and More

Montague Street is about to get a lot more interesting, thanks to an enterprising… poet? That’s right. Brooklyn Poets, started right here in Brooklyn Heights by Jason Koo, is making 144 Montague St. its home. Think poetry readings, writing workshops, open mikes, and more. We talked to Jason about the genesis of Brooklyn Poets, inspired by his admiration of Walt Waltman, Brooklyn Heights’ rich literary history, the prospect of unemployment, and maybe even the Brooklyn Heights Blog, a tiny bit.

How did Brooklyn Poets get its start?


Brooklyn Poets started as a Tumblr blog on May 31, 2012. So to say I “founded” the company, when I look back, it seems kind of funny. Because when you say you founded something, it sounds like a big deal. But we didn’t even have a location at first, it was just in my apartment in Brooklyn Heights. I always wanted to live in the neighborhood because I was particularly into Hart Crane and Walt Whitman, who were both poets who lived here. They are just two of my biggest touchstones. And when I moved here, I was entranced by the history and read a lot about it. That’s one of the reasons I was reading the Brooklyn Heights Blog and also about the neighborhood’s architectural history.

That’s also when apps started getting big and you just felt like you could start your own business digitally with just an app. There was a real sense of empowerment in that regard. When May 31st rolled around that year, I might have randomly just found out it was Whitman’s birthday, maybe on the Brooklyn Heights Blog. (See 5/31/12 BHB post that mentions Whitman.) I took that as a sign, maybe I should really do this. Every poet I knew had a Tumblr at the time. Maybe I’ll just start a Tumblr and start posting about Brooklyn poetry history and if I’m into it enough, I’ll develop it further.

I also started Brooklyn Poets because I realized I wouldn’t have a teaching job come fall of 2012. So, I began thinking about alternatives as people often do in NYC. One of the things that occurred to me is that the job I had at Lehman (College) was so work intensive. I was teaching four classes per semester and directing the English graduate program. And I would have these fanciful thoughts like, “Why can’t I teach my own workshops in my own home, then I won’t have to commute an hour and a half to the Bronx? I could make more money and cut out the middleman.”

So, I started thinking about what would make an ideal poetry school, what I’d do if I didn’t have to teach in an institution of higher education, which has all these constraints that are antithetical to teaching, like very big class sizes. I thought I’d just try to teach poetry workshops, since I had some former students and knew a lot of poets in the city. I thought I’d see how it goes and promote it on social media. My first workshop had 3 students and the second had 5, and it was just in my apartment. In the fall of 2012, I hired the first teacher, Dorothea Lasky, who teaches at Columbia now. The next year, I hired Melissa Broder who’s gone onto become much bigger. Also, John Murillo. It’s funny when I look back, they’re big names now, but back then they were just hustling.

How did you find and decide on the space on Montague St.?

That was set up through our board president Isaac Myers, who I met because he came to our events. He’s a poet and writer who runs a literary journal Curlew Quarterly. He’s not only a writer, but a practicing lawyer with real estate experience. I always thought it would take much longer to find a space, but the pandemic was actually good for us because online instruction became the norm in 2020. Suddenly, our customer base opened up to everyone, and that was the biggest revenue year we ever had. So, we were able to start saving capital and investing it. With that capital base, we felt good about the idea of getting our own space. We first thought Brooklyn Heights was not even on the table because it would be too expensive. Isaac started looking outside at some spaces, like on Atlantic Ave. that were not quite right. They were either not the right vibe or too expensive or too big or too small.

And then I said, “why don’t we just look in Brooklyn Heights,” because I wanted to find a space that matched our vibe, our community and what we’re supposed to be about. And we found out that a lot of the spaces on Montague St. were shuttered and 144 was one of the first spaces that we saw. We just found Tony Bates, who owns Bentley’s (Shoes), to be a really amenable guy, a really reasonable person. We were almost shocked when he gave us his first proposal. Then there was some back and forth, but he just seemed like someone who’s community-minded and not looking to make a quick buck. He wanted someone who’s going to be in the space for a while and doing good things in the space.

The space itself was perfect from an aesthetic standpoint because it’s mixed use and in a brownstone, not a commercialized space. Tony preserved a lot of the original architectural details. It just looks like an old Brooklyn Heights parlor room. It had everything that we wanted, a part event space and a separate room where we can have a small group workshop. We were also able to convert a closet into a second bathroom, and there’s a small office space in the front. The downside is that it isn’t ADA accessible. So, we thought about it for a while, but there was nothing else that fit all the things that we were trying to hit. And it came to a point where we realized this was a time-sensitive deal and a once-in-a-lifetime rental opportunity.

What types of events and workshops will you hold at the space?

The space will mainly be used for our multi-week workshops that many different teachers teach online and soon to be in person. This summer, we’ll be teaching 21 different workshops, ranging from 5-7 weeks. And we’ll have one day workshops in 3-hour blocks. There are different kinds of poetry reading series we have, like our flagship Brooklyn Poets Reading Series. We invite three poets to read together, there’s usually one emerging poet, and one more established, and one in-between. We have sort of curatorial rules too, one must be from Brooklyn and one from outside. First and foremost, we’re seeking to feature and promote underrepresented writers. That informs everything we do, from board and staff decisions to teacher hiring decisions. We also started offering fellowships to try and bring in students who can’t afford the workshop fees.

Our most popular event is called the Yawp, after Whitman’s “barbaric yawp.” It’s our monthly workshop/open mike event. For the first hour, the students take a generative writing class with one of our teachers and then the second hour and a half is an open mike. If people go to our website, they’ll see all the different kinds of events and our plan is to start adding more. We also plan to sublease the space to poets and orgs looking for an event space that’s affordable. One of the problems for writers or a lit org in NYC is finding a place that you can rent out for less than a thousand dollars. We’re creating a space that we intend to be beautiful, but also specifically for poets to share their work. So, there will be a stage in the front, and good tech and sound. We hope it’ll be a place that can host book parties too, or for lit magazines to hold readings.

What would you tell people, who haven’t developed an interest in poetry yet, that Brooklyn Poets has to offer them?

What we’ll have to offer is a very open, inclusive, community vibe. Although I’m a poet in NYC, I didn’t always feel invited to the literary spaces I was going into, or I was literally just not invited. So, when I created Brooklyn Poets, from the very beginning, I wasn’t going to have a reading series where we’re featuring only White poets. Even in 2012, that’s what I was seeing. Everyone forgets because now it’s a very different scene. But back then, you’d go to ten different readings, and it would be completely White, not even one poet of color.

Also, at the beginning, I wasn’t even thinking about diversity in ages. But when we started doing the Yawp events, we started seeing a wide range of ages, people in their 20’s up to 70’s showing up to open mikes. There was this amazing mix of ages, ethnicities, races, genders, and gender expressions. We’re trying to recreate the same energy in the new space, where people feel included in our community even if they’ve never written a poem or read a poem, or feel intimidated by poetry. The best comments we get from people at our events are, “I never felt included or I never felt cool enough to be at this table,” or “I never understood poetry, but I really like the vibe and so I kept coming back.” And that’ll be true for people who don’t think of themselves as writers, but they just like the energy they’re feeling. The primary thing we’ll offer is openness and inclusiveness. And to me, that’s what Brooklyn is supposed to be about. 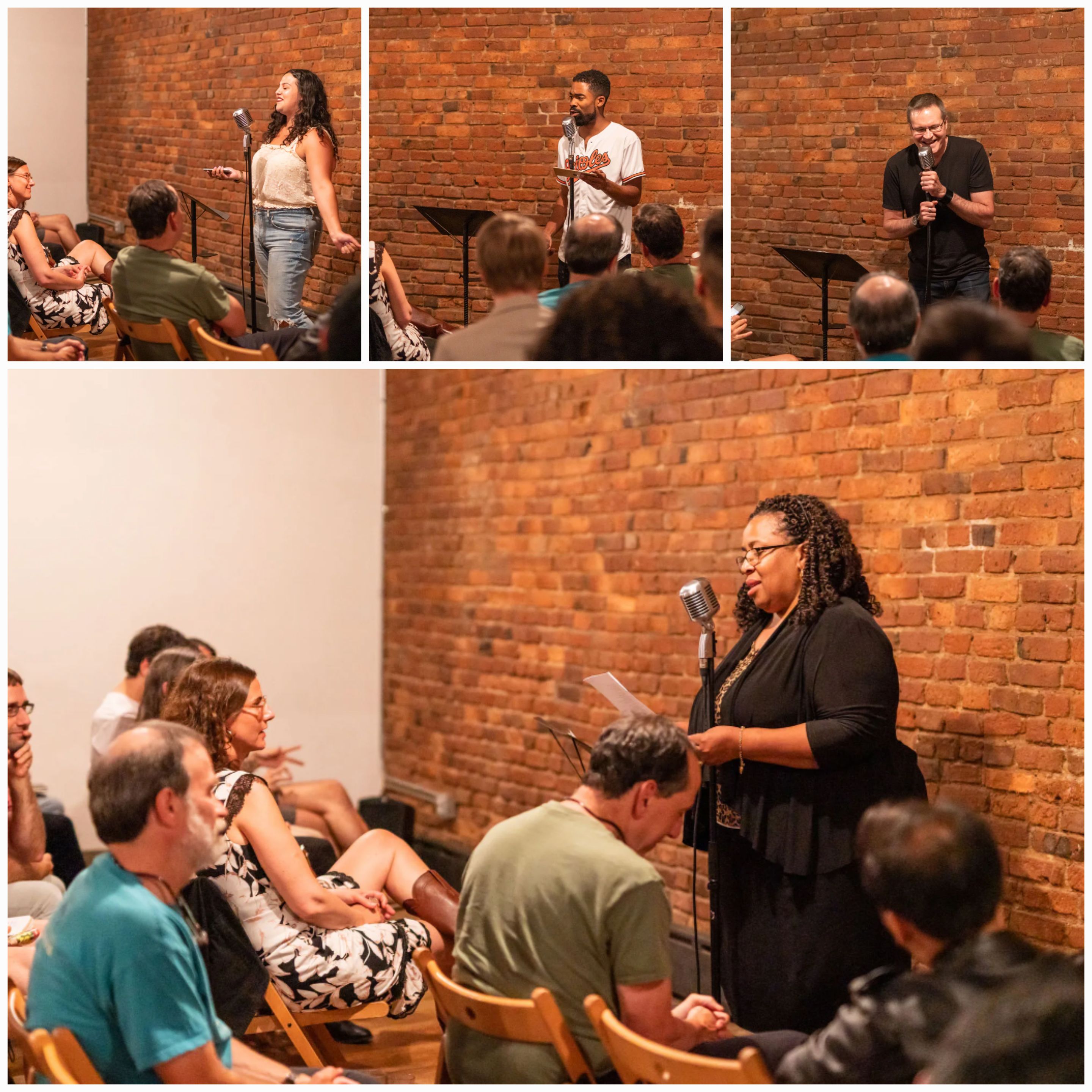 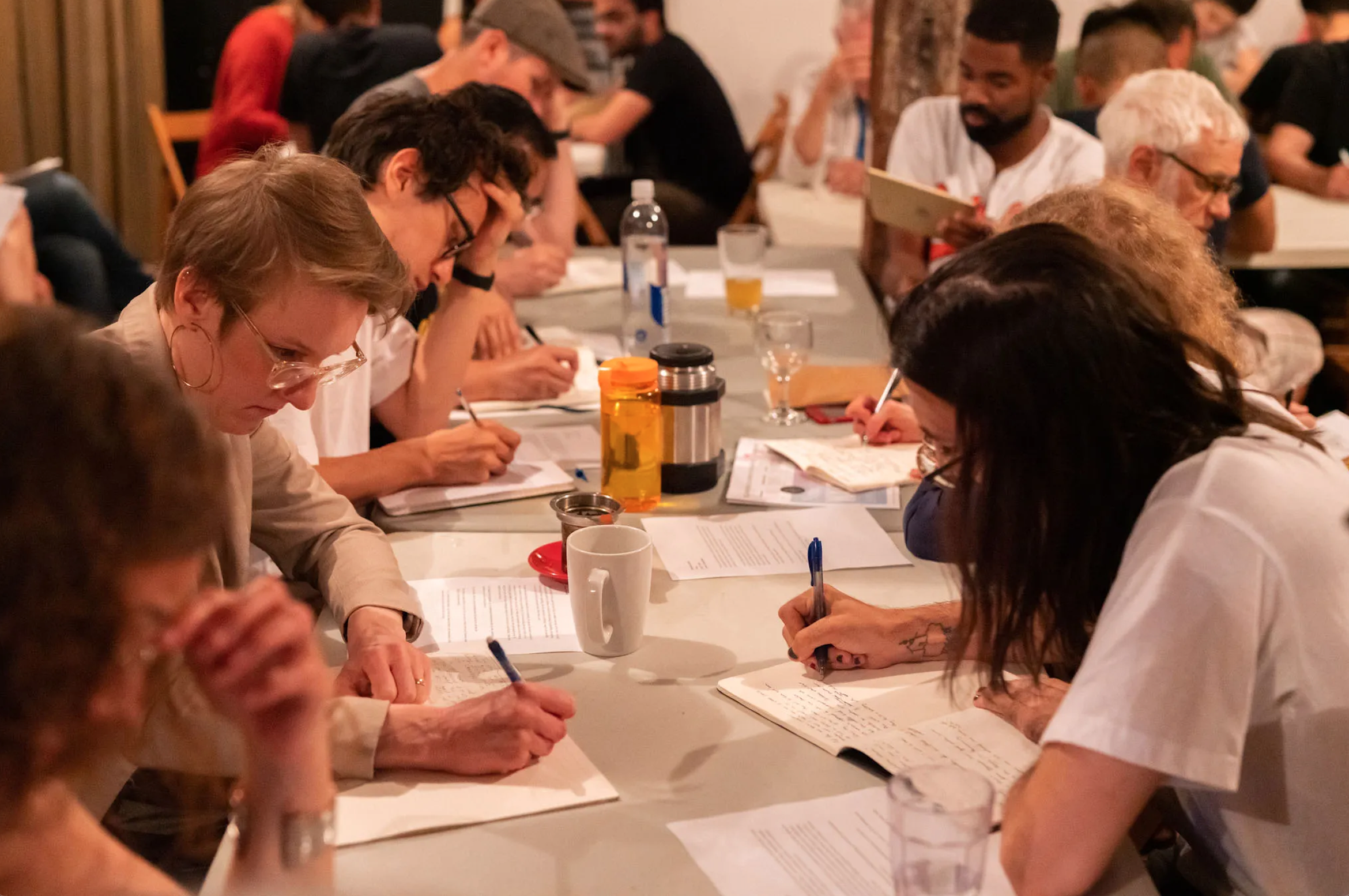 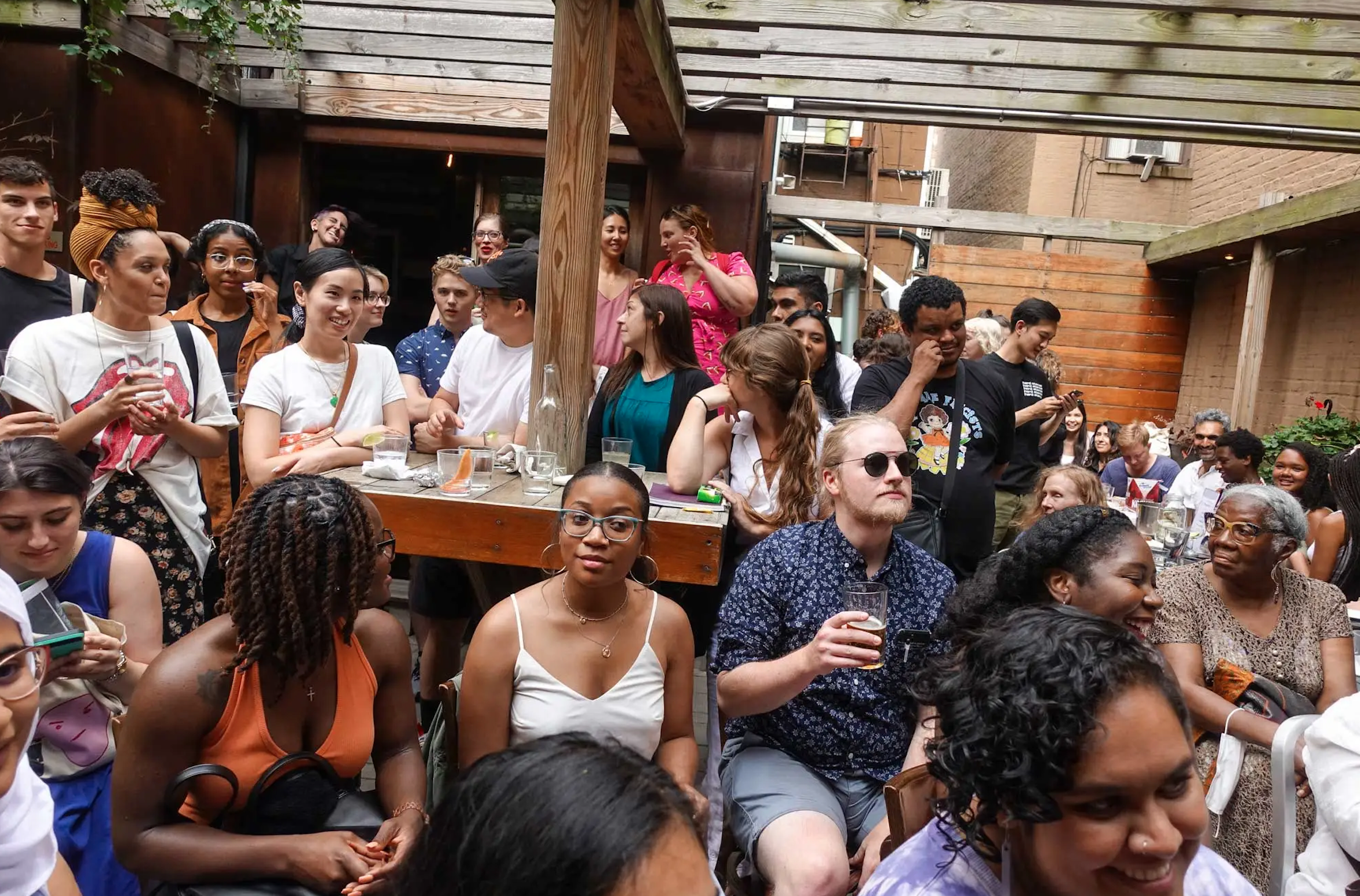 At a Poetry Reading Event in 2019. Photo courtesy Jason Koo. 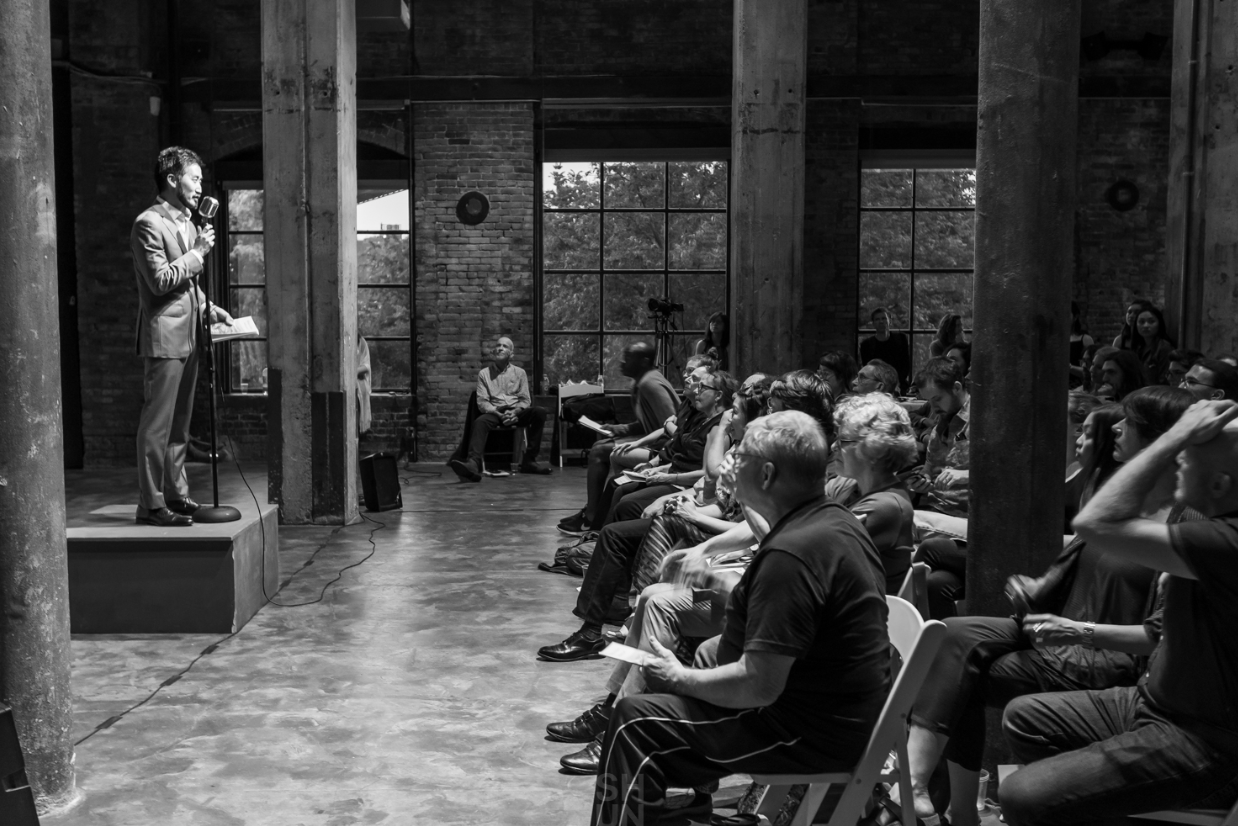 At the Brooklyn Poets Whitman Bicentennial Celebration in 2019. Photo by Shun Takino. 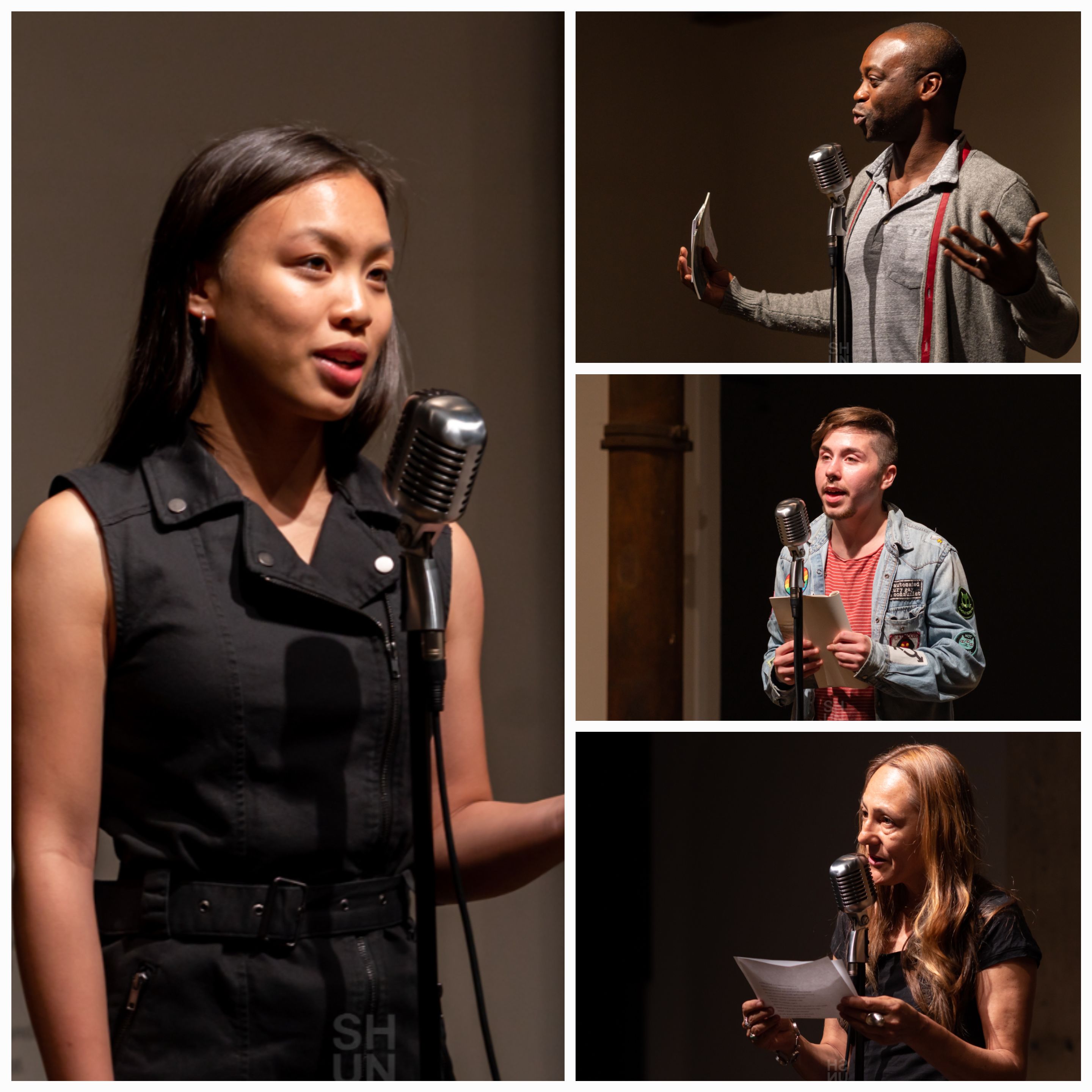 At the Brooklyn Poets Whitman Bicentennial Celebration in 2019. Photos by Shun Takino.

Brooklyn Poets’ grand opening and ribbon cutting ceremony will be on Sat., July 23 to coincide with Open Streets Montague. More details to follow.