Upcycling, China, And Art Unite at The Brooklyn Teacup

In the spring of 2018 while out for a run, erstwhile Brooklyn Heights resident Ariel Davis made a discovery that would eventually lead to her having to leave the neighborhood she loved.

“I literally stumbled across a big set of china,” she said. “The pattern reminded me of a beautiful dress my mom wore, and I thought, ‘I need to do something with this.’”

She prevailed upon her husband to make the ultimate neighborhood sacrifice.

“I called him at 11pm and told him that he had give up our street parking spot and come pick it all up.”

Thus was born The Brooklyn Teacup.

Davis described her mother and grandmother as “china fanatics,” but as a self-described millennial living in a one-bedroom apartment, she had neither room for nor interest in a traditional set.

Though initially unsure what she’d do with the china, she knew that from both an artistic and environmental perspective, throwing it away didn’t make sense, especially as she knew that there had to be thousands of china sets out there that would likely be discarded.

“Then I was looking at my sister’s wedding registry, and included was a three-tier stand,” she said. “It was really expensive and not nearly as nice as what I’d found on the street.”

So she picked up a hand drill and went to that font of all knowledge, the internet, to learn how to upcycle the china she’d found into a wedding present for her sister.

Since then, her work has been featured in The Washington Post, she has a sales site on Food 52, and she was interviewed for The Side Hustle podcast. She’s sold more than 100 three-tiered stands, from china sets she’s found or bought, or from pieces brought to her by customers for a bespoke item.

From those initial efforts that ended with more than a few cracked plates, Davis can now convert a few pieces of china into a stand in 15 minutes. And her business has grown so much that she had to move out of her small Brooklyn Heights apartment to Park Slope, where she’s been able to create a studio. 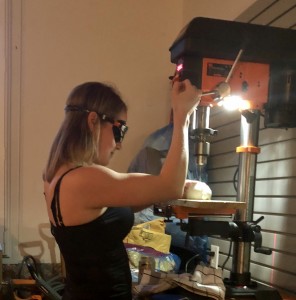 She has partnered with Brooklyn Women’s Exchange and Vineapple, and she monitors Ebay, thrift shops, flea markets, and Facebook marketplace for people selling china.

Prices for custom-made items range from $45 for a ring dish to $75 for a three-tiered stand, with ready-made pieces ranging from $45 to $125.

“I’d love the Brooklyn Heights community to think of The Brooklyn Teacup as a resource for upcycling their vintage china into modern heirlooms,” she said. “My goal is to help transform these often-neglected pieces into useful servingware and decor that can be used in everyday life…or given as meaningful gifts to friends and family.”