According to a detailed report by Kevin Duggan at the Brooklyn Paper, the opening of the new Brooklyn Heights branch of the Brooklyn Public Library is delayed until Summer 2021. The one-year delay from the original target opening date is due to stalled and slowed construction caused by the pandemic. When all done, the library will feature:

A main hall stretching through the length of the ground floor from Cadman Plaza West to Clinton St. 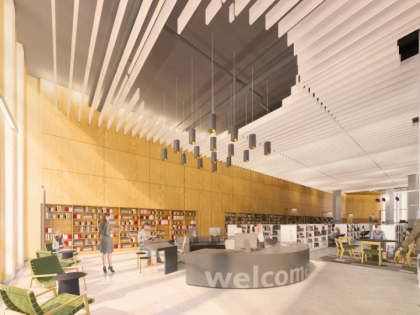 A “teen space” and conference rooms on the mezzanine floor. 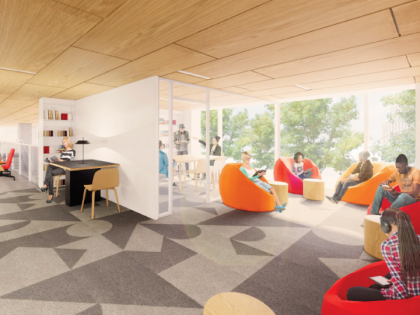 A children’s space on the basement level. 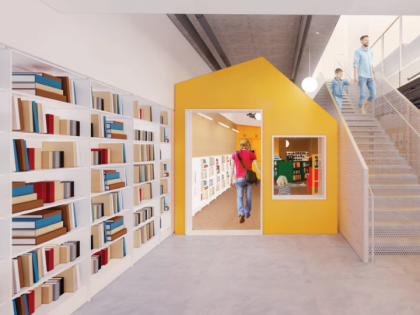 A reading circle, built as a casual space for working, reading, and socializing. 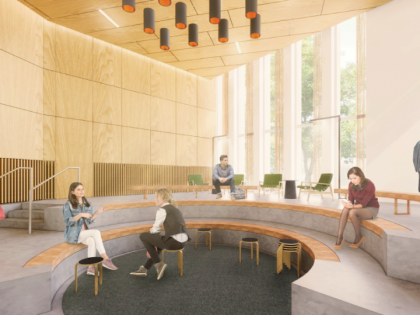 There will also be a STEM lab run exclusively by the NYC Dep’t of Education.

As promised, the six bas-reliefs by Italian sculptor Clemente Spampinato, that adorned the old library’s facade, have been preserved. Two of the panels will be installed in the new library’s conference rooms and will be visible from Clinton Street. The remaining four will be placed in the Walt Whitman branch’s new outdoor garden in Fort Greene, which will open in 2023 or 2024. 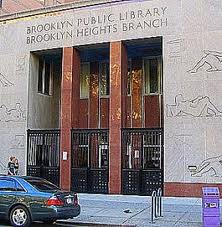 Meanwhile, members will be able to pick up and return books at the Brooklyn Historical Society beginning in December, while the temporary Remsen St. location remains closed.

The Brooklyn Public Library will also open its first Dumbo-Vinegar Hill branch next Summer on Adams St. between John and Plymouth Sts.

(All photos of renderings courtesy of Brooklyn Public Library.)