Due to massively long lines at early voting polling sites, the NYC Board of Elections has extended their hours of operation. The polls will now open at 7:00 am and stay open an hour later than originally scheduled. We posted helpful voting tips last week.  You can click HERE for a refresher.

HOT TIP: If you have an absentee ballot (one that was replaced after the mismatched envelope snafu), you can skip the line entirely by dropping it off at your early polling site. 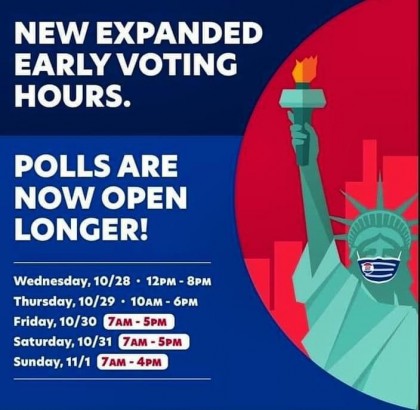 If you do find yourself in a long line, don’t despair. Volunteers for Pizza to the Polls have been delivering pies to early voting locations all across NYC and the U.S. Actor, Paul Rudd was recently spotted handing out cookies at the Barclay’s Center as a thank you for voting. Anecdotally, despite inclement weather and long waits, New Yorkers have been waiting patiently to perform their civic duty.

New York Magazine collaborated with 48 artists to offer a new spin on the ‘I Voted’ sticker. There are four versions of the October 26th issue, each with 12 unique designs and an accompanying sticker sheet on the inside cover. (Milton Glazer, co-founder of NY Magazine and designer of iconic I Love NY logo, would be so proud.) Brooklyn Heights’ own, KAWS, is one of the featured creatives. (A retrospective of his work, KAWS: What Party, opens at the Brooklyn Museum February 12th).

Gothamist reports as of Wednesday night, nearly 600,000 people have voted in NYC. Brooklyn has the greatest number of early voters in the five boroughs. GO BROOKLYN! So, let your voice be heard then post your ‘I Voted’ selfies in the comments!

Halloween Is Not Totally Cancelled in Brooklyn Heights!
Know Your Voting Rights