Pastoring During a Pandemic: An Interview with Rev. Adriene Thorne of The First Presbyterian Church of Brooklyn

Rev. Adriene Thorne says she’s not magical. But many in the community would disagree. Since moving to Brooklyn Heights four years ago to become Pastor of the First Presbyterian Church of Brooklyn, her mark on the community has been tremendous. Adriene tends to her congregation of 300 members, with a focus on faith as it intersects with justice and human rights, and with a call to spread love above all else. She is active in the Brooklyn Heights Interfaith Clergy Association and advocates for unity among the diverse faith communities in the area. She also volunteers on the School Leadership Team at P.S. 8 where her daughter Petal is a rising 5th grader, and co-chairs its Equity and Diversity Committee which aims to cultivate a diverse and inclusive environment at P.S. 8 and the community at large.

The blog interviewed Adriene about pastoring during this extraordinary time when the need to physically distance makes gathering at church impossible now and for the foreseeable future.

(Full disclosure: Adriene and the interviewer are friends, as are their children who are schoolmates at P.S. 8.)

How are you doing, really?

I’m exhausted [laughs]. Even on my good days, I’m exhausted. And it’s not even so much… it’s just sort of a mental exhaustion. I feel like I never stop thinking or worrying about something.

I totally relate. It’s been three months since First Presbyterian has been able to hold live worship services, how have you shifted to serve your congregation?

I think we’re one of the lucky churches. We’ve been live streaming worship almost since I arrived here four years ago. So the transition for us has been pretty smooth. So, instead of having 20-30 people on the live stream, we’re all on the live stream.

We start the hour before with a bible study which we used to do and now we do that via Zoom. And worship pretty much looks like it looked before. Some of my colleagues have been doing a scaled-down service. We’re still doing what we call prelude to postlude. So we start with music; we do all the prayers; we have a sermon; we have solo singing. Everything you would experience in person, we’re doing online. The added benefit is that because we record everything in advance and stitch it together like a movie, we’re able to add images. One Sunday, we added a laugh track because it was Holy Humor Sunday. We couldn’t have done that in person. Anything you can do in a movie or TV setting, we can do now. 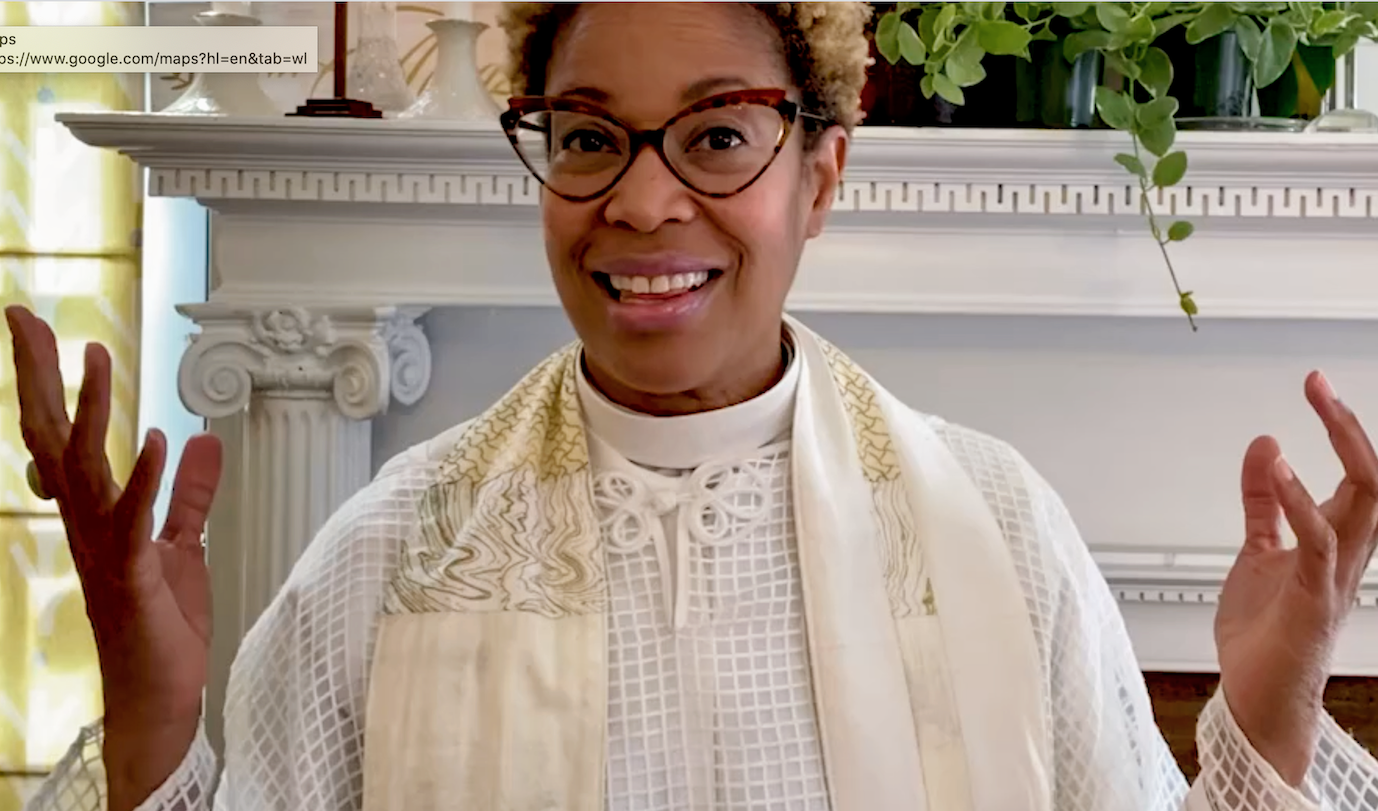 Rev. Adriene Thorne delivers a sermon from a safe distance at home.

The church is renowned for its incredibly talented choir and musicians, who I understand are a tightly-knit group. How have they been now that they’re unable to practice and perform together in person?

Our minister of music Amy Neuner is very creative, and her husband Chris Neuner does the online worship production. Our choir typically rehearsed on Thursday evenings. Amy used to play music and from wherever we were joining her, we all would just sing, but of course we couldn’t see each other. What she has shifted that into, is choir members recording themselves singing, and then we show videos of that. That way, we can see each other and hear each other do solos or duets, and that’s been really great. This week, she’s going to pull from the archives and just show videos of the choir doing beloved songs from over the years. She calls it “going back to the vault.” 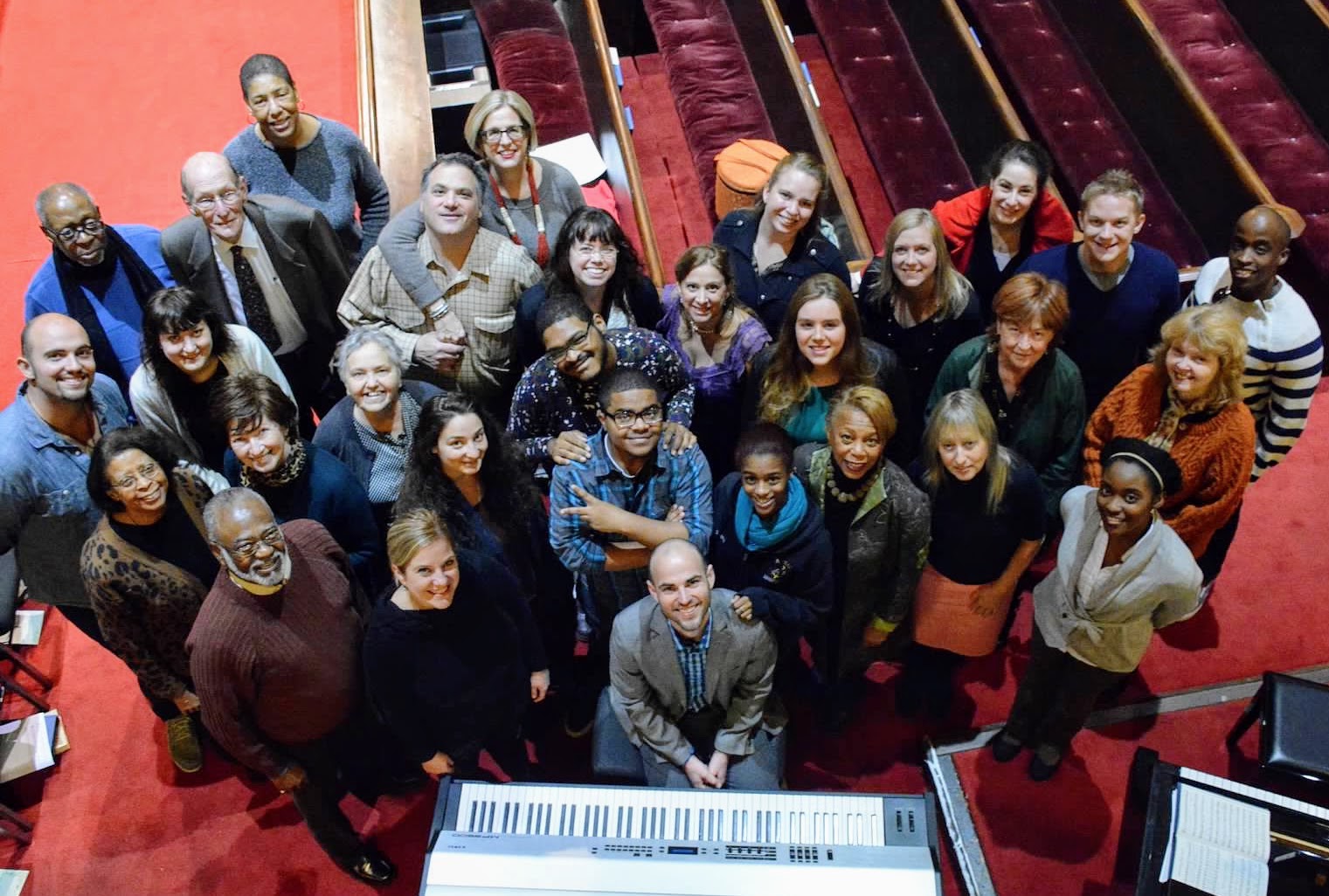 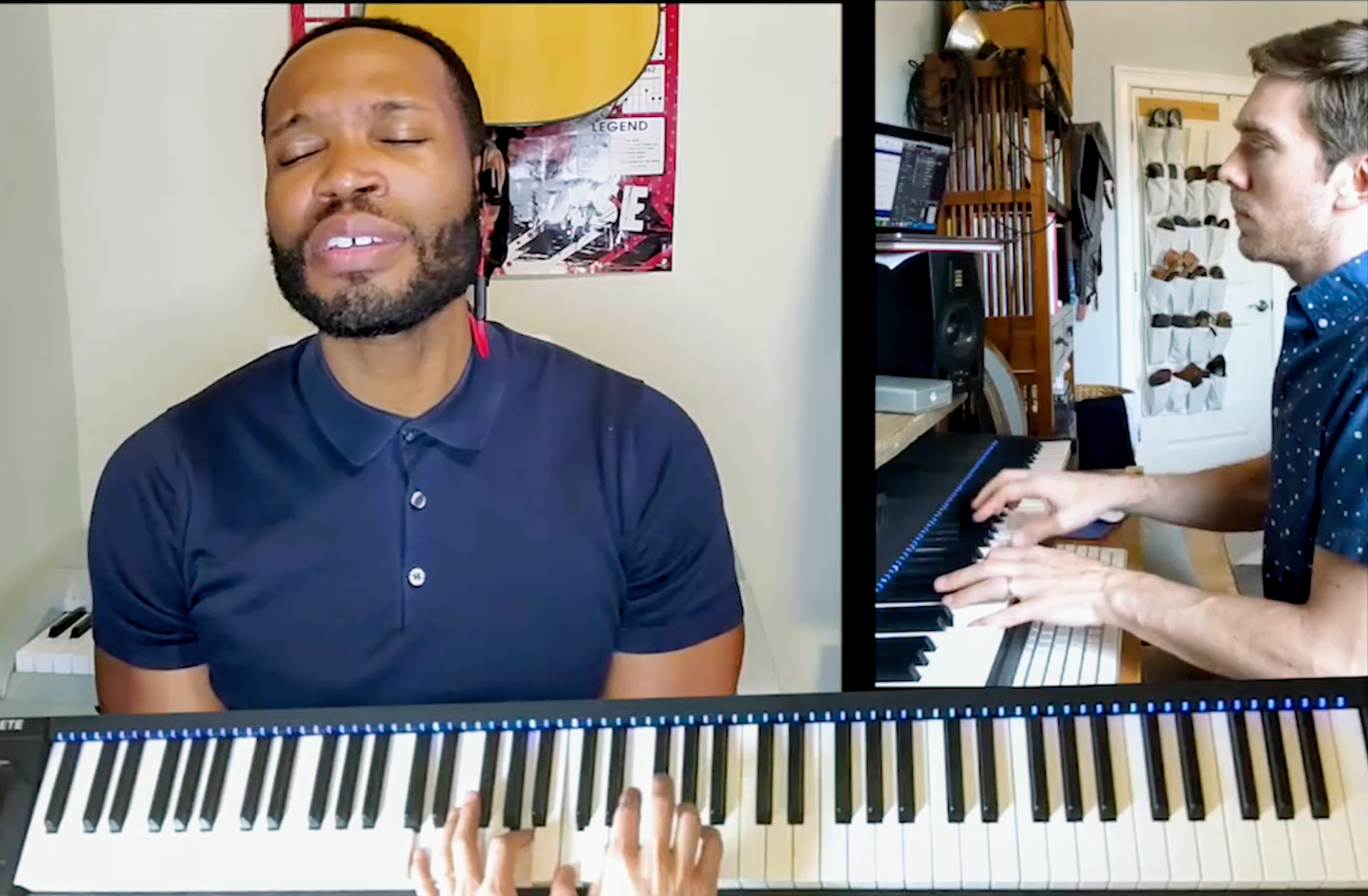 Since we’re friends, I’ve known you to have a usual week packed with meetings with church staff and condolence calls to parishioners, not to mention all the special events you host at the church throughout the year, as well as all your volunteer work. How much has your regular schedule changed and how?

[Laughs] Well I do educate my child, although I wouldn’t say I’m actually educating. But I try to make sure she does some level of education each day. My schedule used to be to take her to school, go to the gym, and start working at around 10:00 a.m. Now I just block out my morning to exercise and then help jump start her educational effort. So I work much later into the evening now. I’m actually able to do more condolence calls, much more interaction with parishioners now than ever before, because I was always at meetings at Borough Hall or at P.S. 8. There are no meetings now. So I’m doing lots of phone calls, lots of hand-written notes. That’s the biggest shift and I actually love that much more than my typical schedule.

Places of worship are now allowed to hold gatherings of 25 or less people. Does the church have any plans to take advantage of that soon?

So, we’ve not had a formal conversation. We’ve only touched on it lightly. Probably when the elder leadership meets again this month, we’ll look at it more formally. But I’m not recommending that we do. Our community has close to 300 people and many of them have underlying conditions. Like a lot of churches, we also have a sizeable number of members over 65. Churches and communities of faith are probably the number one vectors of spreading the virus. We hug, we kiss, we sing, we eat together. I don’t think there is any way to do worship as well in person, with all of the restrictions we have to take, that will match what we’re doing online. So I don’t imagine we will be back before 2021. But that’s just my guess.

When the church finally opens to live worship, how do you envision services to look like in a congregation built on a close-knit choir and multi-generational memberships, and the passing of peace with people shaking hands, hugging and kissing.

In response to the President recently saying, “churches must reopen!” one of our members, Tracy Zamot, said on facebook, “my church never closed, we just moved worship online.” And I thought that was so correct and I was so proud that one of our church members said that. Because we didn’t close. Synagogues haven’t closed. Mosques haven’t closed. People are still being church. Church originally happened in people’s homes. We’re still together and we’re still doing church. It’s just hard to imagine gathering in person before there’s a vaccine. And I’m not slamming anyone who makes a different choice. But for our community, to do that before a vaccine, we’d be putting so many people that we love at risk. During a recent webinar with other church leaders, we discussed how singing is the worst thing, followed by playing woodwind instruments, because of how singing aspirates the virus. So we would be asking people to come and sit in an enclosed space and inhale what could potentially kill them. And I just can’t with good conscience do that to people that we love. So it’s hard to imagine live worship before there’s a vaccine.

I saw that there are bins outside the church front doors asking people to drop off what they don’t need and to take whatever they need. Have you seen a lot of activity there?

I put up a notice a few times on facebook and I’ve been incredibly heartened by how this neighborhood has rallied to fill those bins. People walk by and take photos. People come by with their own groceries and stock the bins. I just want to shout out the neighborhood for taking that to heart. I’ve always thought, and people have always said to me, “oh Brooklyn Heights, those people don’t need anything.” For one, I don’t think that’s true. I think there’s a great need in this neighborhood. I also think there’s a lot of sorrow underneath the surface. I also think this is a neighborhood of people who want to do good. And if they have the opportunity and we make it easy, they will step up and do good. So I just want to shout out the neighborhood.

What does pastoring mean now and what has been the most surprising change for you since the pandemic began?

I think like all of us, there are things that you knew before that are now just so much clearer in this moment. I think what’s most clear for me is that I’m not doing this alone. And the other thing they teach you at seminary is that you don’t have the power to save anyone. You always know it in the back of your mind, but I think a lot of clergy, just like parents perhaps, think we have a lot more power than we do. This virus makes it very clear that you are one of many trying to do the best you can to help people in your care. But you’re not Jesus, you’re not magical. You’re human and you have to sleep. All of those things have become very clear. So, I have to ask for help. I have to be able to say, “Can you call that person?” I have to take a break because if I don’t, I’m going to lose my mind.

You’ve been tasked with providing comfort and guidance during a time of tremendous uncertainty and anxiety, and you’re going through it as much as anyone else. So how do you care for yourself, so that you can care for everyone else.

I had five people that I cared about die in April. It’s been hard. I recently took a week vacation. That’s part of the care that I’m taking for myself. But I have to say my coach had to say to me, “you need to take a break.” Because I was just going-going like everyone else, and once things got less intense, I thought I was fine. But the minute she said, “you need to take time off,” all I could think about is taking time off. Because you’re just in shock. We’re all going through this trauma all at the same time. We all need someone to say to us, “you need to stop, you need to take a day off.” Sometimes we can’t see it until someone else says it. The other way I take care of myself, I always remind myself that I am limited in the number of people I can care for. So one of my most urgent jobs was making sure that the community was connected to each other, so they could take care of each other. As I said, we have almost 300 members in our community and they’ve got to start calling each other beyond what they had already been doing. They’ll check on each other, run errands for each other, and all those good things. So that’s been amazing.

Rev. Adriene Thorne is a mother, a Pastor, a writer, a certified life coach and disaster chaplain, and so much more. Her life before divinity studies included a career in the arts and performing with the Dance Theatre of Harlem and the Metropolitan Opera, among others. As a gifted dancer, Adriene also held the center spot on stage as a member of the world famous Radio City Rockettes.

All are welcome to join services on Sundays at 11:00 a.m. or listen to the choir’s recorded music at this link. You can also watch past services and listen to Adriene’s sermons at this link.