The Brooklyn Daily Eagle features the full line-up and schedule for this year’s Battle of Brooklyn events. The festivities start this weekend and will continue until August 27th, which is the 243rd anniversary of the Battle of Brooklyn, “the first major engagement of the Revolutionary War to take place after the U.S. declared its independence in 1776.”

Brooklyn Heights history buffs (and we know who they are by the comments on this blog) will tell you that on August 27, 1776, the British stormed the American troop’s main camp right here in Brooklyn Heights, where the “Maryland 400″ fought a brave battle but were far outnumbered and overcome by the 2,000 British troops. Their sacrifice, however, bought George Washington enough time to regroup and eventually throw the Brits out for good. If this is news to you, read more about the Battle of Brooklyn and hear the narrated tour of the Old Stone House by Brooklyn native John Turturro at this link. Or better yet, visit the Old Stone House for the Maryland 400 Remembrance Ceremony on Sunday, August 18, 12 – 2 pm.

Other Battle of Brooklyn events include a 17.76 mile ruck march on Sunday, August 25, sponsored by the NYC Veterans Alliance. The march starts at 6:30 a.m. in Bay Ridge and ends at 5:30 p.m. at the Brooklyn War Memorial for a solemn remembrance ceremony, followed by a reception at Park Plaza Diner. The remembrance ceremony is open to the public and entry to the reception can be had for $20 at the door. At the Brooklyn Historical Society on Tuesday, August 27, at 6:30 p.m., historian Christian Di Spagna will discuss Joseph Warren, “a physician and Son of Liberty who fomented the early rebellion alongside Samuel Adams, and who never got to see the revolution fulfilled after his tragic death at the Battle of Bunker Hill.” 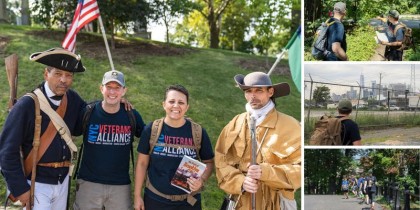