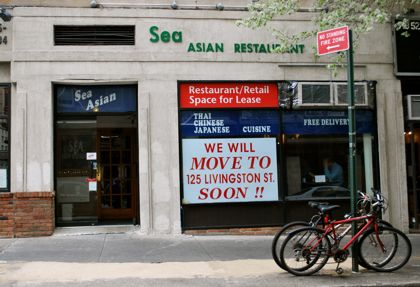 The pan-Asian restaurant Sea Asian, at 78 Clark St., will move to 125 Livingston Street later this month, as a sign posted this morning indicates — but manager John Tjon told BHB that he’ll still deliver Sea’s trusty tuna rolls and pad Thai to the Heights.

“The place I’m existing is pretty good, and I’m comfortable there, but, regarding the rents, they were asking a lot more than we were expecting and we couldn’t go for what they were asking,” Tjon said. “It was too much.”

But he wanted to stay in the neighborhood, so he found a space several blocks away on Livingston Street, between Boerum Place and Smith Street, and will reopen sometime in the next few weeks. The Clark Street location will close on April 26, he said.

While he hasn’t hammered out a delivery range yet, Tjon said he’ll return to the Heights if need be.