Filed definitively under “better late than never,” here’s a look at some local news from the last few weeks. Please support the publications that produced these stories by clicking the links and getting the details from the folks who did the reporting.

Sean Penn was the subject of protests back on April 19, when he appeared at St. Ann’s Church for a sit-down with journalist Jon Lee Anderson. Apparently locals were none too happy with the actor’s interview with alleged drug kingpin Joaquin “El Chapo” Guzman (scheduled for trial here in Brooklyn) that appeared in Rolling Stone in 2016.

“Whether it’s Chapo, Hitler or Donald Trump … they are just people,” Penn said.

PS 8 kids make the Guggenheim in an exhibit that opened yesterday and runs through June 13. The students, along with others in the city, participiate in the Guggenheim’s Learning Through Art program, founded in 1970 by Guggenheim volunteer Natalie Kovner Lieberman in response to the elimination of art and music programs in NYC public schools.

Perfect Paws goes mobile. Formerly housed on the corner of Hicks and Pineapple (in the space now occupied by Joe’s), then at Clark Pets, the grooming service now operates from an easily identifiable van. There doesn’t seem to be a website, but there is a Facebook page that provides context information: Text 929-391-9097 or leave a message at 718-852-6200. 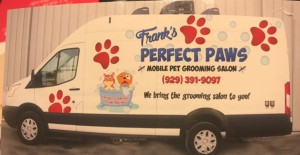 Requiem for Court St. Office Supply. “The wounds have been so bone-deep that the store found it difficult to cover its overhead and turn much of a profit,” writes Joseph Berger in the Times. Packer student Rhea Lieber pretty much sums it up:

Rhea Lieber, a senior at the nearby Packer School (sic), wrote a letter, in both Hebrew and English, lamenting the loss. “The Packer community is devastated to say goodbye to such a neighborhood staple (no pun intended),” she wrote.

A regular shopper there, I’ve already headed in that direction dozens of times to pick up a card or some school supplies, only to remember that it’s another huge loss for our neighborhood.

Local group seeks BBP entrance from Montague Street. The POVs pro and con are nothing new. Easier access to the Park; dispersal of crowds throughout the neighborhood rather than concentrated at a couple of entrances; an increase in foot traffic for Montague St. businesses vs. residents’ distress at the prospect of that same foot traffic.
In other BPP news: hot dogs. Beginning June 9, free hot dogs from a “bloated and bizarre hot dog stand” that doubles as an exhibit from the Public Art Fund.