Former Brooklyn Heights resident, Amber Scorah and Oklahoma native Ali Dodd have something unimaginable in common: their infant sons, Karl and Shepard, each died in day care within the first week of their returning to work.  The two women are from opposite ends of the country and the political spectrum but are bound by their shared grief. (Ali reached out to Amber via Twitter as soon as the news of Karl’s passing reached her). Together, they have become powerfully outspoken advocates for paid family leave.

This past Monday, at a press event organized by Paid Leave for the US (PL+US), Ali and Amber, together with Adrienne Kromer of Pennsylvania and Kathryn Martin of South Carolina, two mother’s who lost their infant daughters in the same way, made a pilgrimage to the Trump and Clinton campaign headquarters.  Their mission: deliver over 135,000 signatures from their petition which asks the candidates, if elected, to “take action for national paid family leave policy in their first 100 days in office.”

As reported by WPIX 11, the group first stopped at Trump campaign headqauarters.  There they were met by a junior member of the campaign staff but were not invited to the offices to discuss the issue.  They waited a half hour to no avail.

The reception at the Clinton headquarters in Brooklyn Heights was much warmer.  The mothers presented a box with the petition signatures to a campaign representative in view of the cameras.  They were invited upstairs to the offices where they met with a campaign policy director among others for at least 40 minutes.

In a statement made after their meeting with the Clinton staff, Amber said of Trump, “If he wants to make America great again the best way to do that is by investing in our children.”  Ali added, “We are not asking people to change their vote, we want whomever is elected to support paid family leave…We’re asking for a more pro-family policy whether it comes from the Right or the Left.”

Refinery29’s coverage offers in-depth Q&A interviews. But as the group was dispersing Amber shared, “This is a way for our sons to go on and do something important.” 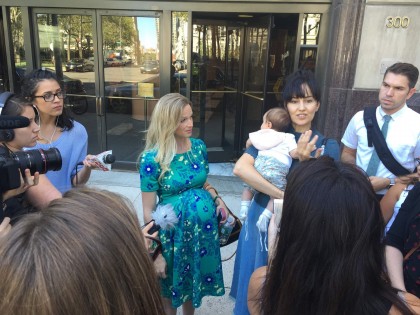 HOW CAN YOU HELP:

3) If you or your family have been impacted by “inadequate family leave” PL+US has asked that you share your story via their survey.