The long, unfortunate history of the eyesore of a brownstone at 100 Clark St. (aka 1 Monroe Pl.) dates back to May 2008, when BHB reported that the building had been condemned after years of neglect and disrepair. At the time, the three remaining, rent-stabilized tenants living in the 18-unit building were forced out and the building partially demolished. A full demolition was stopped by a lawsuit by then owners Penson Co. Since then, the building sat for almost a decade – sad, unoccupied, hazardous, and an ugly blight on the neighborhood. 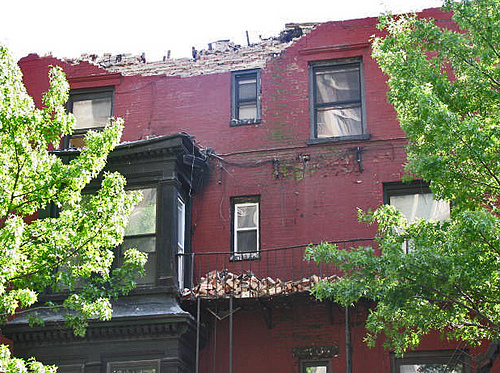 In 2010, the building was sold to Newcastle Realty Services for a song at $1.25M, but saddled with the tenants who retained occupancy rights, liens, and the landmarks approval process. The “confidential” offering memorandum from the realty company is here for all to read, that contains everything you would ever want to know about the deal. Since the sale, the neighborhood has been eagerly watching for signs of reconstruction to start, which reportedly was delayed not for a lack of funds, but by the “complexity” of the project, according to a Department of Buildings spokesperson.

Finally, an end might be in sight. The Eagle reports that last Tuesday, the Landmarks Preservation Commission approved a reconstruction plan for the building. A prior plan had been approved in 2011, but the building permit expired when the owners failed to go forward with the construction. “The whole neighborhood welcomes such a moment when we can restore this house,” said Landmarks Commissioner Frederick Bland, who is also a Brooklyn Heights resident. Meanwhile, a spokeperson for the owners said the plan was to build rental units, not condos.

International Day of Friendship This Sunday at Borough Hall
The Long, Sad Story of the Selling of LICH