The Hills Open at Governor’s Island: A Dispatch from the “Department of Tell Me Something Good”

Tuesday (the 19th) was a gorgeous day in NYC.  The skies were clear, blue and dotted with wispy, fluffy clouds. It was the perfect weather to take the ferry to Governors Island for the opening of The Hills.  In a word, they are spectacular offering 360 degree views of New York harbor.  The 25 foot Grassy Hill overlooks a new 30-acre park.  Discovery Hill rises 40 feet and features a permanent art installation by British artist Rachel Whiteread. Slide Hill, also 40 feet tall boasts the city’s longest slide (57 feet long and 3 stories high!)  Outlook Hill tops out at 70 feet and offers soaring, breezy views of New York harbor.

The Hills are a product of a 2006 international design competition and a feat of engineering built with rising sea levels in mind.  FUN FACTS: They incorporate recycled granite from the Island’s old sea wall for the scramble, lightweight pumice and a white seat edge along The Hills’ base, a “resiliency measure to protect the Hills against wave action during projected flood events.”  They are also comprised of 297,000 cubic yards of fill, in part from demolition debris from the Island’s non-historical derelict buildings. In total that’s enough to fill 1,816 subway cars that if linked together would create a train 29 miles long. 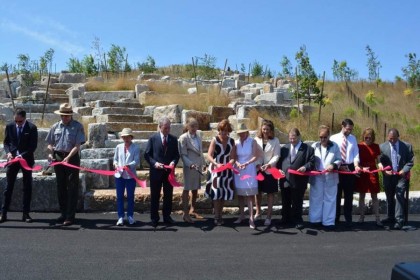 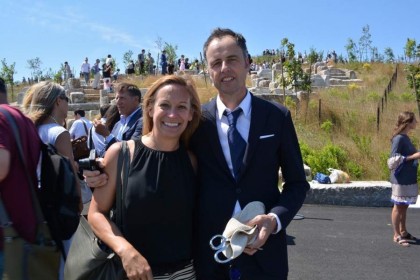 At the dedication, State Senator Daniel Squadron, who secured $450K in funding for Slide Hill, spoke optimistically about the public/private partnerships that created Governor’s Island.  “I feel it is a very exciting day…One of the challenges of Governors Island is that it really isn’t in any one neighborhood…[But] it didn’t need to be in a neighborhood to create a neighborhood. And the community of folks who have helped support it ([private philanthropy], the government, the community members…have really made it a place that is a new kind of gathering spot and a new kind of neighborhood square that otherwise wouldn’t have existed.  That is an extraordinary statement about the work that has helped build it and also about the potential of great open space and great new spaces even if they have a lot of challenges behind them.” 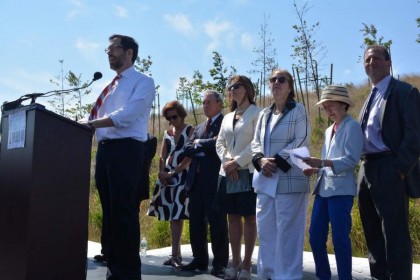 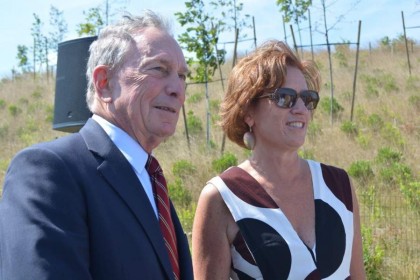 Leslie Koch, President and CEO of The Trust for Governors Island is stepping down after a ten-year tenure.  During her remarks, Ms. Koch evoked a speech given by Mayor Bloomberg given in the early aughts which emphasized the city’s inclusiveness.

“It is really important for us to reflect, at a time, a very challenging time this year, as people are talking about difference and about strangers and potentially about building walls between us and people who don’t look like us that we built Governor’s Island for New York, by New York to be a place that everybody shares.  That embodies the openness that is our city.  And as you walk up the path to Outlook Hill, go down the slide, really look again at the Statue and what she stands for…That is what we are celebrating: A shared space, owned by the public, created for and with them.”

After the ribbon cutting, attendees made mad dashes up the Scramble, meandered the well-manicured paths and enjoyed free ice cream.  Ferries to Governors Island run 10:00 am – 6:00 pm Monday through Friday from the Battery Maritime Building in Manhattan and 11:00 am – 7:00 pm on weekends from Manhattan and Brooklyn’s Pier six. 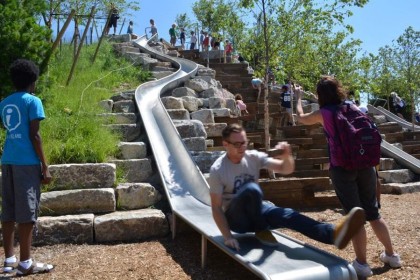 Adults as well as children enjoyed the 57-foot slide. Many shot video as they screamed with joy on the way down. 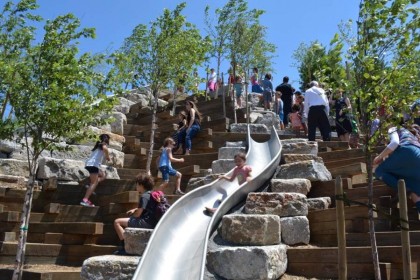 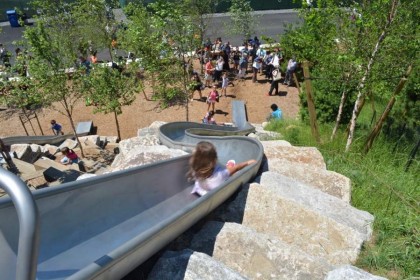 A view from the top. 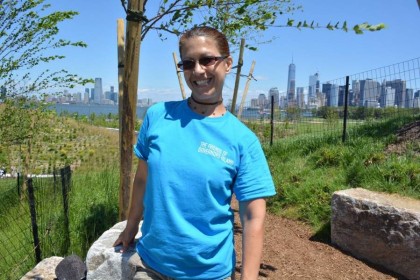 Friends of Governors Island volunteer, Theresa. She is a carpenter by trade. 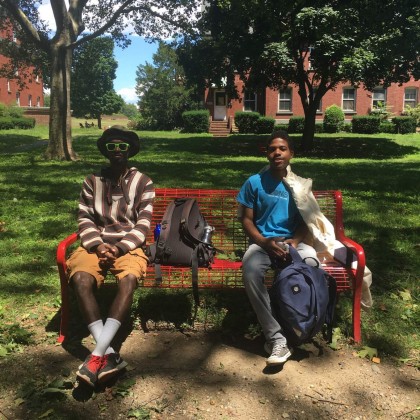 Friends, Travis (left) and Isaac (right) relaxing in the shade of Colonels Row. They live in Queens and “came for the slides and ice cream.” This was Isaac’s first visit to Governors Island. Travis, who enjoys working outdoors has visited many times.

All photos (c) SongBirdNYC 2016.  Please do not use without permission.