After months of meetings, public discourse and national news coverage, the District 13 CEC has voted in favor of the re-zoning in a 6 to 3 split.   The Fort Greene-Clinton Hill Patch live blogged the proceedings.

The CEC first held a Working Session where they attended to other district business including the Superintendent’s Report.  The “special” Calendar Meeting then began at 8:30 (after a brief period of painfully bureaucratic debate over how and when to begin public comment) and opened with statements from elected officials or their representatives.  Councilmember Steve Levin expressed his support for the plan in a NY Daily News article and with brief remarks.  State Senator Daniel Squadron supported the rezoning.  “The proposal on the table will not solve many of the problems we are most concerned about…But, it will offer more predictability this year for the entire community for current prospective parents at P.S. 8 and P.S. 307.  And for that reason, I really do hope that the re-zoning is passed tonight.”

Several members of the Farragut community spoke out in opposition to the re-zoning echoing the previously-voiced concerns that access to hard-won programs at P.S. 307 would be taken away should the proposal pass.  P.S. 307 PTA Co-President, Faraji Hannah-Jones expressed extreme disappointment in the DOE for not meeting the terms a neighborhood coalition’s action plan for P.S. 307, including an additional five years of funding for the Magnet grant stating, “We feel disrespected.”  Executive Director of the DUMBO Neighborhood Alliance, Doreen Gallo spoke on behalf of several DUMBO parents in attendance and read a statement in opposition to the plan citing, in part the DOE’s failure to properly engage the DUMBO community for small group feedback meetings promised when the vote was delayed in October.

For the next hour, the nine members of the CEC took individual turns addressing the audience which grew more antsy with each passing minute.  CEC President, David Goldsmith who has supported the rezoning from the beginning encouraged, “We’re ready to do this.  The time is now.  We owe this to our children.  Let’s move forward.”  By far, one of the most poignant moments of the evening came from Ed Brown-who voted ‘yes’-when he reflected, “The other elephant in the room, it’s not just race.  It’s fear…Because fear has no color.  It operates on both sides.”  He continued by drawing a comparison of parents from the effected communities to deer in headlights.    “What has happened on both sides…adults…have frozen their minds.  They have their mind made up already.  They’ve decided what they want…In freezing, the kids are suffering.”

Throughout the evening electeds and CEC members encouraged the respective communities to remain engaged with the DOE, CEC and their school leadership so that the larger issues raised by the debate could be addressed collectively.  Just prior to the vote, Rob Underwood laid out via his Tumblr blog what he feels are the most pressing challenges facing District 13.  What are your thoughts on how the two school communities can move forward from here? What issues are most important to you for your child’s education?  Comment away! 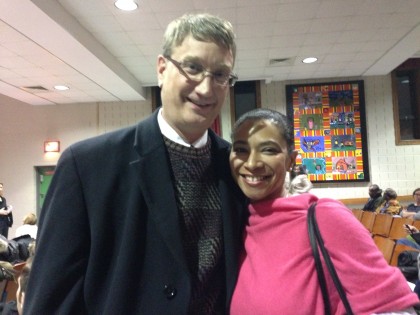