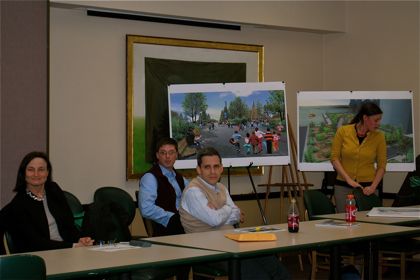 Such enticing park amenities are part of what’s to come at Brooklyn Bridge Park’s Pier 6 — and it will all be ours by the end of the year, Brooklyn Bridge Park Development Corporation President Regina Myer told a standing-room only crowd at last night’s Community Board 2 parks committee meeting.

Myer did not, however, address in any way last week’s news that Mayor Bloomberg may be wrestling control of the park from the state’s hands — she was only here to talk construction, she said, sweetly but emphatically.

Currently, workers are laying pipes for utilities and stormwater retention in the lot, which is at the western end of Atlantic Avenue. Crews will soon start structural work on the 35-foot pedestrian path that will lead from the park’s entrance at Atlantic Avenue to an elevated platform halfway down the pier that overlooks the harbor.

The remainder of the pier — including the water taxi dock — is not yet funded, Myer said.

The entire park costs have now ballooned to $350 million, but only $231 million has been allocated, and plans for revenue-generating housing and hotel projects have been scrapped. The restaurant would provide some cash for the park, officials said, but only about 1-2 percent of the total operating costs.

Construction updates and more renderings are on the park’s Web site at www.brooklynbridgeparknyc.org. And, Myer said she is working with Community Board 2 to organize a tour sometime in the springtime. 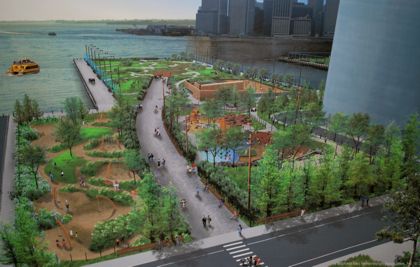 Update: A Toilet in the Park?
Play Ball!