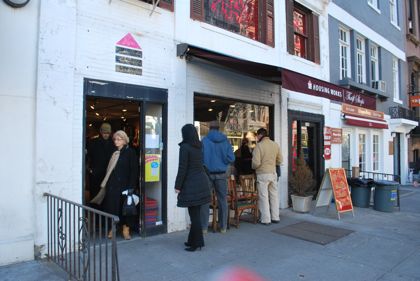 Jennifer Jinks, store manager of the Brooklyn Housing Works Thrift, said people are still swarming the store, but regulars aren’t coming in as often. That said, during our interview, she was interrupted at least twice by customers bringing in their gently-used wares, and many others snatching up best-sellers (and an old baseball bat) at drastically reduced prices.

(For more in the series, check out our Montague Street in Crisis page)

Brooklyn Heights Blog: How has business been, judging the economy?
Jennifer Jinks, store manager of Brooklyn Housing Works Thrift: Business has been great — it’s been good. There are slight changes, here and there. Certain people may not come as frequently — maybe they come once a week versus every day. [People have] a little more hesitation in buying bigger pieces, like furniture. But overall, it’s been steady and good.

BHB: What do you see happening on Montague Street? What are your colleagues saying?
Jinks: I have noticed that my regular shops — Nine West, Aerosoles, even MAC down the street — don’t seen at all busy as they were in the fall and summer, and just the traffic I would say has lessened. Just in talking with people in the neighborhood, people that own wine shops or delis, they all say that their business has decreased very dramatically.