Brooklyn Bridge Park Development Corporation (BBPDC), a subsidiary of the Empire State Development Corporation (ESD) held a hearing at St. Francis College this past Thursday to receive public comments regarding the proposed revisions to the General Park Plan (GPP) and the two intended residential towers at Pier 6.  The hearing was a requirement of the recent settlement between BBPDC and People for Greenspace.  Modifications to the GPP were outlined in the BBPC June 30th press release:

In a packed house, approximately 90 speakers signed up to have their view-points heard at what turned into an over five-hour meeting ending at 11:30 pm. Individuals were to receive three minutes to speak. Those representing an organization were entitled to six minutes.  While not all intended speakers were able to stay for the duration, the hearing had some dramatic high and lows regardless.

Alicia Glen, Deputy Mayor for Housing and Economic Development and Chair of the BBPDC, spoke in support of the modification.  Her comments were met by loud jeers from the audience, “Let’s not turn this into something that its not.  We are not asking to approve the buildings of buildings on Pier 6.  These development sites were approved in the 2005 GPP.  All we are looking to do here is to make to them better by adding these benefits [of the modified GPP].   What this is a discussion about is whether or not to include, let’s be honest, affordable housing, at this site.  That’s ALL this is.” 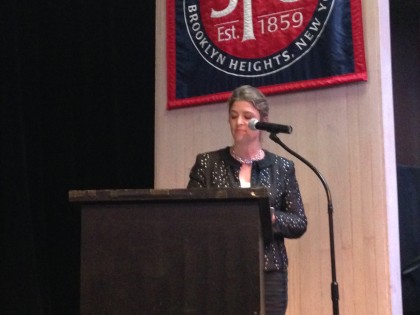 She dismissed the claims that development is not necessary to fund the park citing the park’s own detailed analysis (which was met by shouts from the audience of “Open the books!”) and the recently released study by a “highly respected independent economist,” Barbara Byrne Denham.  Incidentally, the study was released via Crain’s on the same day as the meeting, and reported the development is vital to sustaining Pier 6.  At the same time, Brownstoner reported the study characterizes the success of the retail spaces on Pier 1, 1Hotel and Empire Stores, as “overly optimistic.”

Ms. Glen also refuted crititc’s demands that an additional environmental impact study (EIS) should be conducted, “In November, last year we released a tech memo, that followed the very strict guidelines that have been used by the city for years…This project did not meet a single one of the criteria that would have triggered an environmental review…Additional environmental review would do nothing other than to waste time and resources.  And we will wind up in exactly the same place.”  Regina Myer, President of BBPDC, added “We believe this is a vast improvement on the current plan.  As has been demonstrated, both through our extensive analysis and independent analysis, the pier 6 is absolutely essential to complete the financial model of the park.”

Support was peppered throughout the evening’s testimony from such organizations as the Downtown Brooklyn Partnership.  Executive Vice President, Laurel Brown expressed her “strong support” on behalf of the organization as both the Park and the Partnership’s mission is to “connect communities to amenities and services.” Ironworker, Carole Raftrey representing Build Up NYC, offered “as a long-time Brooklyn resident, I am excited about the development on Pier 6.  The jobs that will be created are middle class jobs that allow workers to provide for their families.”    These comments were, at times, met by boo’s from the audience.  A statement was read on behalf of the President of St. Francis College supporting the project.  Rick Russo, Senior Vice President of the Brooklyn Chamber of Commerce supported the project as it would bring “ground-floor retail, 30 percent affordable housing and 500 construction jobs.”

Both Ms. Glen and Meyer’s comments set the tone for the subsequent reports accusing opponents of NIMBYism that have emerged in the days following the meeting.  But, the majority of speakers-including all of the elected officials in attendance along with experts in real estate, finance, urban planning and climate change-rejected the modified GPP and were opposed the buildings at Pier 6 in their entirety.  Speaker after speaker called for an additional environmental impact study.

Senator Squadron spoke passionately about his long-time opposition to the towers, systematically refuting the Park’s most popular arguments for proceeding with the project.  Squadron insisted that the technical memo fails to consider “modified flood zones, significant — and unanticipated — proposed development at the nearby Long Island College Hospital (LICH) site, a local school overcrowding crisis, increased need for open space, a more crowded transportation network, changing neighborhood character and additional construction impacts.”  A full transcript Senator Squadron’s testimony can be found on his State Senate website.  He concluded “The park is not facing a crisis in its operating budget. The rights on the Pier 6 sites will not expire. The urgency seems more a matter of politics than one of policy.  Too many questions are unanswered, alternatives unexplored, and claims unproven to approve this proposal.” 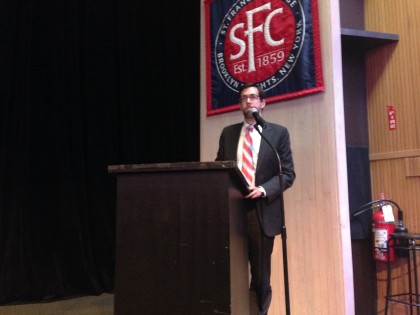 Assembly Member Jo Anne Simon, supported Senator Squadron’s testimony and added, “We are victims of our own success, both the park and the neighborhoods in this area…I would suggest a moratorium in building in Downtown Brooklyn.  We have a moment to say ‘what are we doing here?’  It is not any one developer’s fault that we have too many children in our schools…But it is a big problem that we are all part of.”  Simon also added that she also supports a supplemental EIS.

P.S. 8 PTA Treasurer, Todd Castilow educated the BBPDC about the wait-list of 50 Kindergarten children at PS8, overcrowding in District 13 schools and pointed out a loophole in the Technical Memorandum’s methodology.  According to the Park’s own study, “PS8 is the only school serving Pier 6 in Brooklyn Heights…P.S. 8 is now at 140% capacity and the other 8 schools in the subdistrict are at 98% capacity.  That’s right now.  When Pier 6 is done, ALL the schools in the sub-district will be at 140% capacity.  ALL 8 of them…the twisted logic, used by the city to determine if a development project can proceed relies on whether each individual project increases our already overcrowded schools by more than 5% on its own.  This is a gaping loop hole which all of the developers are sneaking through.”  His remarks drew applause but as Mr. Castillow neared the end of his prepared statement (shortly after the 3 minute mark), the moderator insisted he stop.  This drew angry shouts from the crowd “Let him speak!” 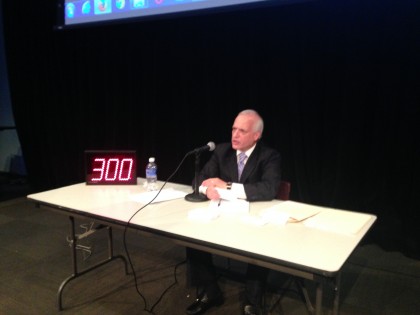 Edward Kramer of ESD served as the Moderator.

The confusion surrounding time allotment persisted and repeated itself with the Fred Kent, President of Project for Public Spaces, a global organization at the “hub of the global Placemaking movement, connecting people to ideas, expertise, and partners who share a passion for creating vital places.”   He was escorted out of the auditorium saying “you’ll have to carry me out!” but later allotted six minutes to make his remarks.  He opened with, “This park is the poster child of public money creating private development.”  He walked the audience through the park’s design pier by pier and illustrated that pier 6 in particular is not conducive to enjoying the water.  “If you think there’s anything positive about [Pier 6 design] as a gateway to the waterfront or a gateway down Atlantic Avenue, [there] is absolutely not…there was never any community process done for that, and that is a tragedy and atrocious and I believe that Pier 6 should be taken out.”

Joy Romanski, a climate change scientist at Columbia University’s Center for Climate Systems Research, noted quickly rising sea levels and called the development of the towers an “ill conceived plan to site housing at the waterfront” within in a known flood plane.  A representative of the local Sierra Club chapter called the proposed towers an “affront to the concept of what a park should be” explaining we “must examine the public’s access to the waterfront” and that the shadows cast by the buildings would block sunlight to important marine ecosystems and diminish the enjoyment of the park itself.  Nate Rubin, Treasurer of the Atlantic Avenue Local Development Corporation explained that the “proposed modification doesn’t give any value to” a thoughtfully designed gateway between Atlantic Avenue and the park.  Linda DeRosa, President of the Willowtown Association agreed, saying the traffic on Joralemon Street has become untenable and that an opportunity to build a proper entrance will be “squandered” if the Pier 6 buildings go up as planned.

SHOW ME THE MONEY

Council Member Steve Levin outlined the challenges his constituents face due to over-development and called for a new environmental impact study.  He also suggested could be more forthcoming regarding its finances, “Major questions have been raised about the park’s financial model and the necessity of this project and the community has not been given enough time to process new information…The park seems determined to move forward with the plans for Pier 6 no matter how much the facts on the ground have changed….Once begun this project cannot be taken back….the board should reject the proposal so it can be re-examined…before the community is deprived of parkland forever.”

As part of his prepared statement, Patrick Killackey, President of the Brooklyn Heights Association questioned, “Although the GPP continues to contain language affirming the commitment ‘to build only what is necessary to support annual maintenance and operations,’ the modification exempts the housing on Pier 6 from that requirement ‘without regard to project finances…,’ why would you now consider eliminating that central premise? Why would you authorize the construction of 315 and 155-foot towers regardless of whether they provide one needed cent of revenue for this park?”

LET YOUR VOICE BE HEARD

The public may submit written comments for the thirty days following the meeting.  Comments will be accepted no later than Monday, Aug. 31 at 5 p.m. They may be submitted via email to Ms. Rose-Marie Mahase, brooklynbridgepark@esd.ny.gov or faxed to 212-803-3778.  Or, comments can be mailed to Ms. Mahase’s attention at Empire State Development, 633 Third Ave., New York, N.Y. 10017.

DISCLOSURE: This contributor has been active in the parent group that created the ‘WeArePS8Too’ petition and participates in PS8 parent advocacy.

Open Thread Wednesday
Hearing on Save The View Now Tomorrow at 10:30 A.M.