Opponents of the new residential buildings being constructed at the north and south ends of Brooklyn Bridge Park were out in full force at the Brooklyn Bridge Park Corporation’s (BBP) board meeting Thursday (2/26). The gathering of upwards of 70 remained mostly polite but — as has been the case in other recent BBP meetings — it did become emotional and forceful at times, with local residents and advocacy group members publicly shaming the BBP board members for a perceived lack of transparency and responsiveness to local concerns. Several attendees referenced Spike Lee’s seminal Brooklyn movie Do the Right Thing, and your humble BHB correspondent was on hand to catch the action.

The meeting, which took place at Borough Hall at 11 a.m., began simply enough, with the BBP board voting to approve several not-so-contentious measures on maritime maintenance.

But then City Councilmember and BBP board member Stephen Levin brought up the (non-binding) resolution recently passed by the Brooklyn Bridge Park Community Advisory Council (CAC), which calls for the Board to halt to all construction of Pierhouse at the park’s north end and the further work on the planned Pier 6 residential towers at the south end until concerns are addressed about the park’s potential overfunding and the new structures’ impact on views, school overcrowding, flood zones, and other local infrastructure. Specifically, the CAC is calling for a new environmental impact study, a housing study, and — as it has since November of last year — full park financials to be published. 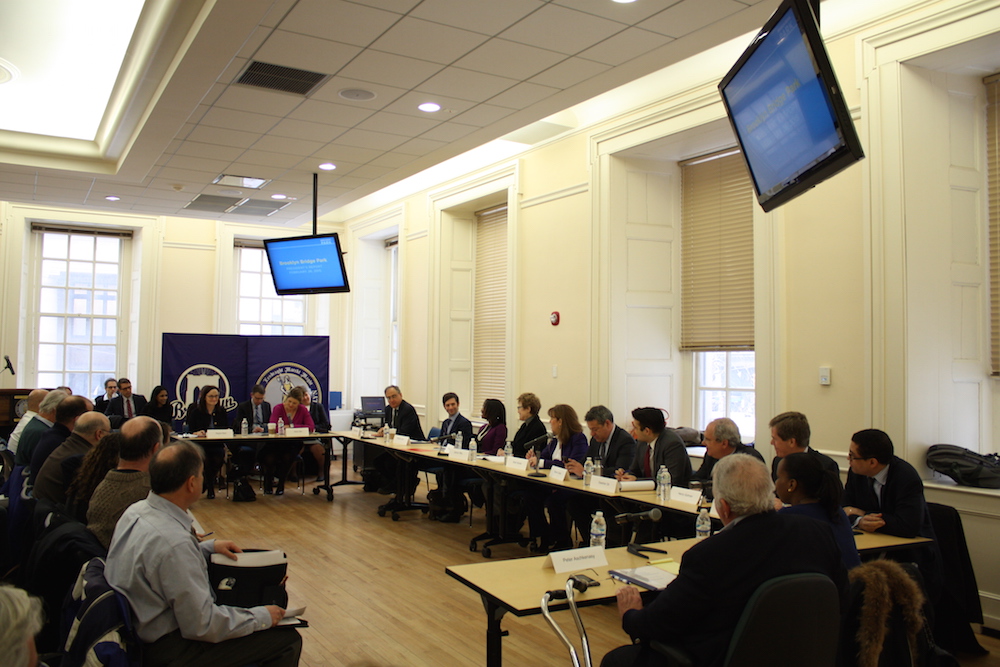 The full BBP board.

“I think as an elected representative and city council member I want to ensure we are being responsive to the public, and our partners in the public as part of the CAC, I think it’s appropriate we consider their resolution at this time,” Levin said, introducing a motion for the board to approve it.

However, deputy mayor and BBP board chair Alicia Glen moved quickly to shut him down, saying, “as you you know, we are not going to be entertaining a motion on this topic. The chair does determine the agenda for the meeting, and after consultation with management, we decided that these items, although they are included in the board packet… they would not be subject of a vote at this time.”

The meeting progressed onto the public comment portion, in which attendees were given two minutes maximum (and strictly warned in mid-speech with a paper sign and a dinging bell) to raise matters before the BBP board. Over 20 people took advantage of the opportunity, nearly all of them offering vocal opposition to aspects of the under-construction Pierhouse and planned Pier 6 residential developments, and the BBP’s handling of their complaints. 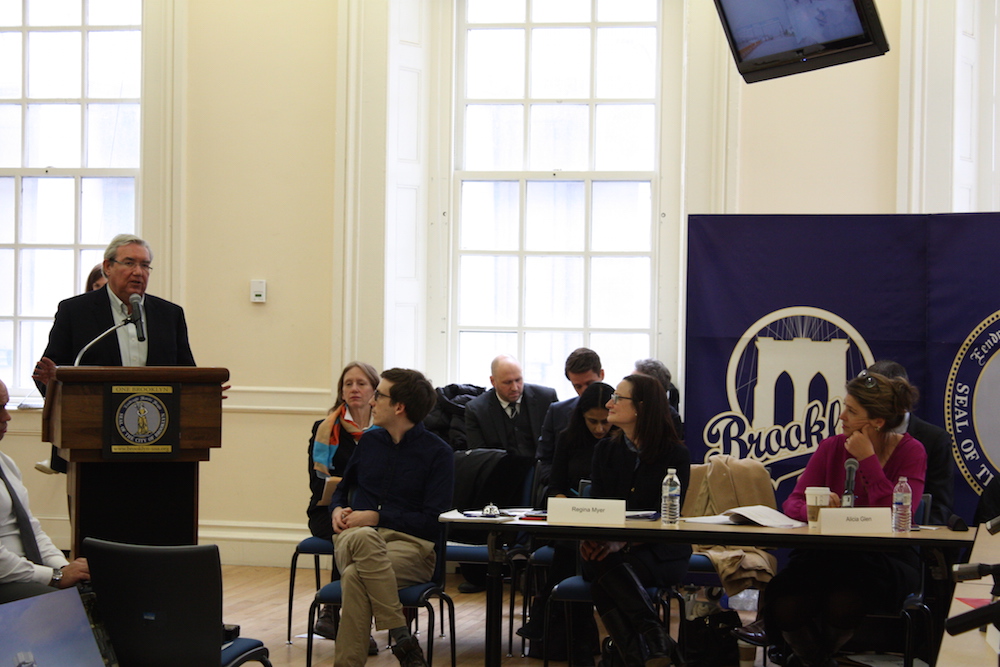 CAC co-chair Andrew Lastowecky got the ball rolling, saying, “the overcrowding of schools is not a joke. People in this community have already had their children shipped to other neighborhoods for school.”

Public School 8 PTA co-presidents Kim Glickman and Ansley Samson came up to the podium later with data to support the point of school overcrowding, noting that this year’s pre-registration numbers saw 30 more kids than last year, meaning there would need to be six or more kindergarden classes. “We acknowledge that not all this is about Brooklyn Bridge Park, [but] a large chunk is,” Samson said, noting that with 1,025 residential units coming online between Pierhouse, Pier 6, One John in Dumboand the existing One Brooklyn Bridge Park translates to 300 more public school kids in a school with a capacity for 500. “We need a plan on the table to deal with this very significant overcrowding problem before we add to it by approving additional residential housing in this school zone.”

Calling for further environmental studies, Save Pier 6 founder Ren Richmond got applause for his closing line blasting one of the two planned towers: “There’s just no need to put a 31-story in the park entrance in a flood zone when there are no school seats and when the park truly doesn’t need the money.” The BBP says that Pier 6 housing is needed to fully fund the park’s continuing operational budget, while opponents say the BBP isn’t taking into account tax breaks. Noting that plans for Pier 6’s 15-story and 31-story towers include affordable housing, some local publications have suggested that local opposition is based primarily on classist NIMBYism.

Addressing the Pier 6 towers, 58-year resident and architect Joe Merz said “psychologically, they represent as well, a blockade in the sense that people live there. They own a part of the park. There’s no question about that…the psychological aspect of these buildings has never been considered.” 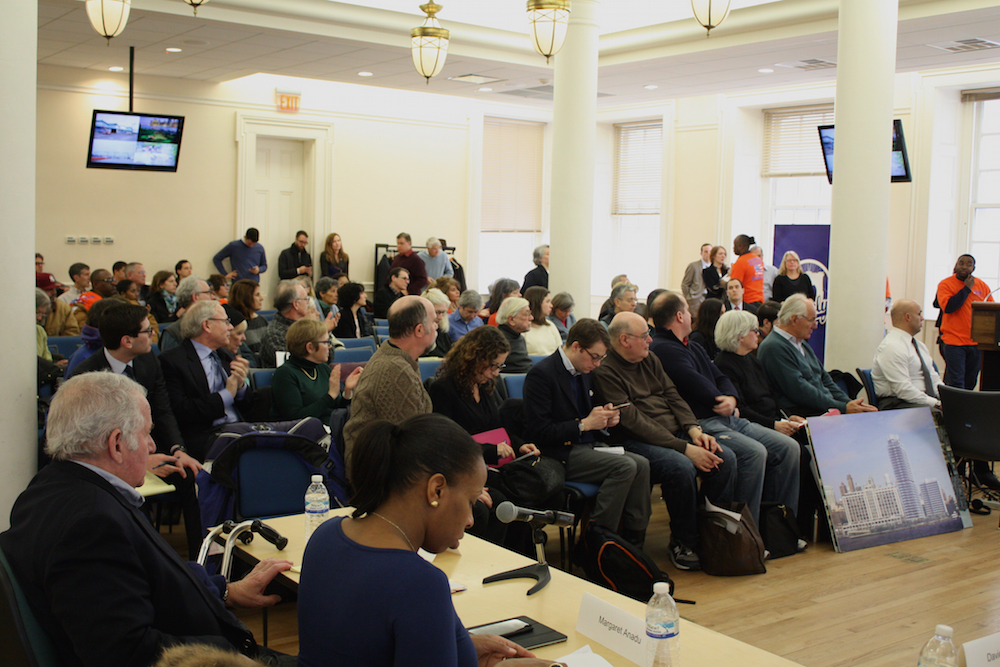 A member of advocacy group Build Up NYC speaks.

Also among other vocal critics were several members of local resident advocacy group Save the View Now, and members of worker advocacy outfit Build Up NYC. Both groups have repeatedly called for a halt to construction at the quickly rising Pierhouse on the park’s north end, and while the NYC Buildings Department has issued several stop work orders in recent months — the latest in January — they’ve all been lifted after subsequent changes and promises by the developers and the BBP. One Build Up NYC member also pointed out the BBPC still hasn’t released all the names of the 14 developers who bid on the Pier 6 contract.

Martin Hale, chairman of the nonprofit advocacy group People for Green Space and Pier 6 opponent, said that by not bringing up the CAC’s resolution, BBP board members “threaten to violate the public’s trust. This will be with your reputations forever. We simply ask that you, in the words of the great Spike Lee, ‘Do the Right Thing.’” 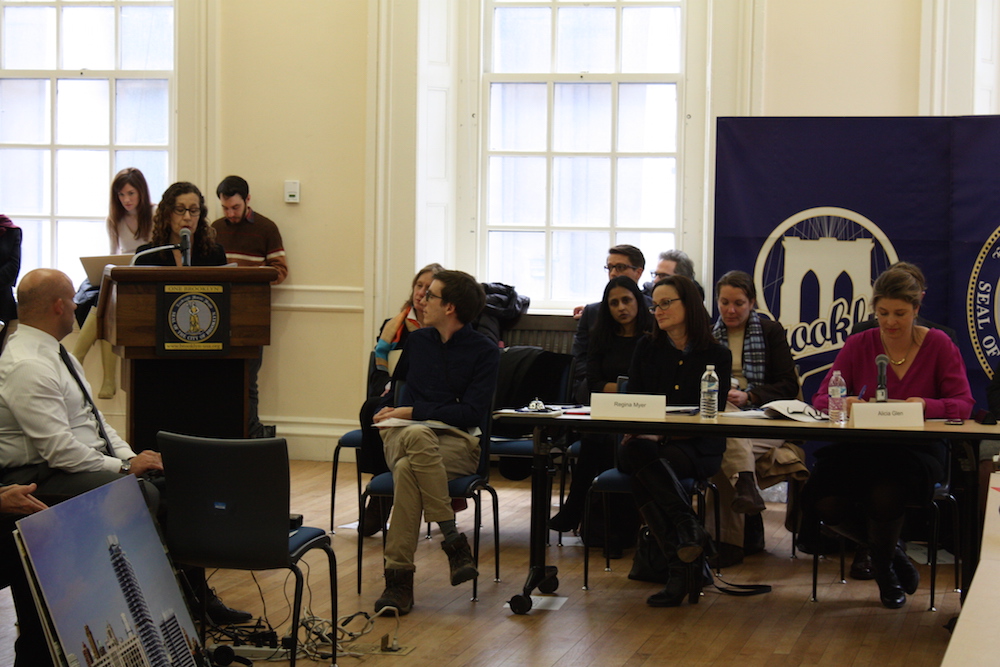 But perhaps the most intense criticism came from outside Brooklyn Heights itself. Doreen Gallo, CAC member from the DUMBO Neighborhood Association, told the board: “You’ve pulled off one of the greatest scams of all time. You’ve sold our beloved bridge. You’ve destroyed the protected view-planes from the promenade and perhaps worse, you’ve destroyed the views of the great bridge from within the park itself…The people of Brooklyn deserve better.” She also called upon the board to “do the right thing” and stop Pier 6 development.

The meeting ended around 12:20 p.m. without any sign that the critics were changing board members’ minds on the previously approved residential development plans. That said, throughout the public comment period, the BBP board members remained silent and took notes, as per their policy of not responding directly in an effort to keep to the allotted time that Borough Hall was available. 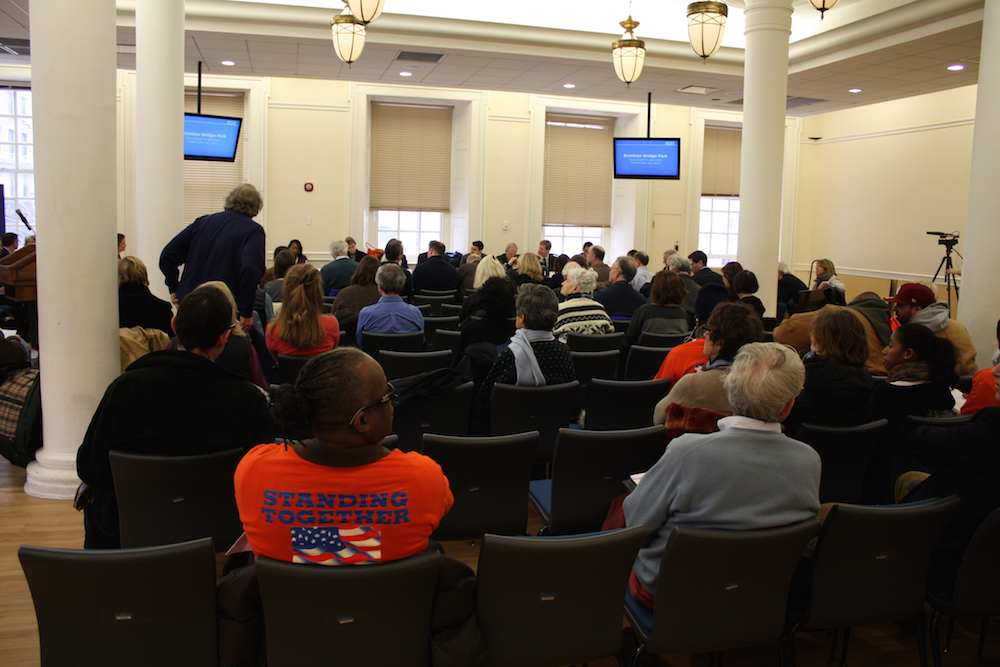