So What Really Happened at the Brooklyn Heights Chipotle and Serving the NYPD?

Chances are some of your Facebook friends are outraged or “shocked, shocked” at the alleged behavior of employees at the Montague Street Chipotle.

The story goes something like this according to mythbusting site Snopes.com:

Employees at a Chipotle Mexican Grill in Brooklyn refused service to eight uniformed NYPD officers after making a “hands up, don’t shoot” gesture to indicate their distaste for the policemen.

The Facebook meme, seen here posted by someone decribing themselves as a teacher in the Brooklyn Roman Catholic Diocese reads: 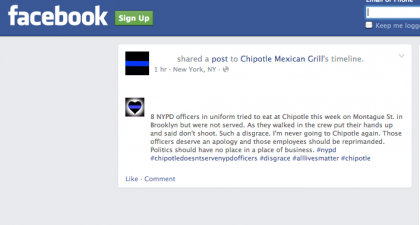 However, this statement, Snopes says, is misleading and could be interpreted that all the employees at the restaurant were in league against the NYPD.

Chipotle has issues a statement and Snopes notes:

In short, Chipotle reviewed video footage of the NYPD officers’ visit to the Montague St. location and determined that what transpired involved not “the crew” of that outlet but a single employee who acted alone and has since been reprimanded. Chipotle has explicitly stated the behavior of that employee was neither condoned nor ignored (although they have not yet offered specifics of how the issue was handled). Chipotle confirmed that the eight NYPD officers were not denied service but rather left the restaurant of their own volition.

Ironically, the same Chipotle store caught heat in 2012 for offering NYPD officers a discount on meals.