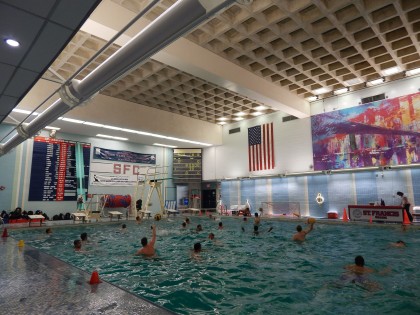 Hot Time at the Pope Center! St. Francis Water Polo Opens at Home with a Win Over Iona College

By brooklynheightsblog on October 9, 2014 1:56 pm in Brooklyn Heights, Sports

Last night the hottest spot in Brooklyn Heights was underground. It was standing room only on the deck of the Generoso Pope Center pool at St. Francis College as its men’s water polo team played their first home match of 2014 against Iona College.

When a Terrier meets a Gael, guess what happens? The Terrier kicks butt, as SFC cruised to a 17-7 win over their beleaguered guest to improve their Collegiate Water Polo Association (CWPA) Northern Division record to 4-1.

St. Francis—5-6 over all and winners of four straight—was led by four goals from senior defender Balint Toth. Senior driver Vuk Vujosevic and junior defender Nathan Kotylak contributed three goals each, while junior center Bora Dimitrov chipped in two goals to up his team-leading total to 25. 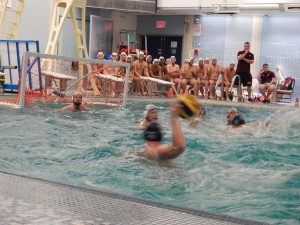 The Terriers received a strong performance in nets from junior goalie Zack Cleveland, who stopped 10 Iona shots including a big save on a Gael breakaway early in the third period. 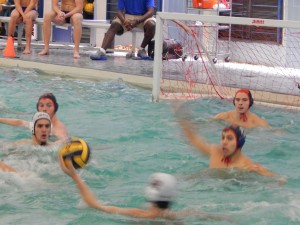 An overflow crowd loved every minute of it. Nestled in the basement of St. Francis’ athletic center on Remsen Street, the small, humid aquatics center was filled to the brim with fans with a blowout win by the home team lifting the collective spirits of Terrier faithful. 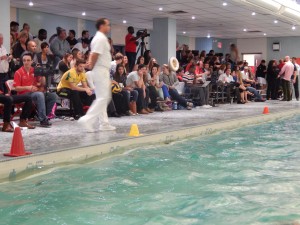 Wednesday’s match was an ideal tune-up for the Terriers as they travel today to Los Angeles to participate in the prestigious SoCal tournament, which pits the best teams from the East against the country’s best water polo programs. Hosted this year by UCLA at the Spieker Aquatics Center, a state-of-the-art outdoor aquatics facility (this is LA, after all) on Saturday the Terriers will face the Bruins, the country’s top-ranked squad.

Facing the best teams in the country will be a daunting task, but SFC head coach Srdjan Mihaljevic has a simple goal for his team: be competitive.

“I want us to play strong games,” said the Terrier’s second-year coach. “I’m not focusing too much on results. Playing outdoors in the open air, first game in their pool… I can’t say I have an expectation results-wise but I want us to play well.”

Juggling three goalies who will all see playing time this weekend and leading a team that is still rounding into shape, Mihaljevic acknowledged that playing in SoCal is “as tough as nails. We’ll definitely be challenged.” 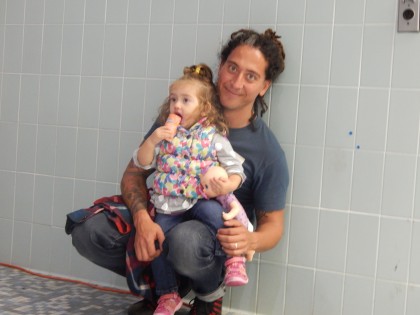 A young fan taking in the match from poolside.