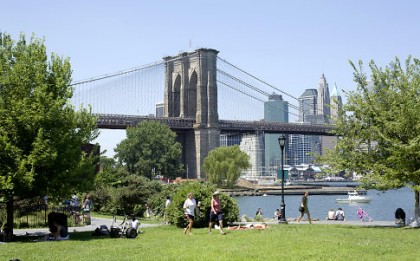 By brooklynheightsblog on September 17, 2014 2:28 pm in Brooklyn Heights

The Wall Street Journal this morning posted a story about competing financial models for the Brooklyn Bridge Park Corporation. WSJ cites the efforts of People for Green Space, a persistent critic of BBPC, who in August released an examination of the park’s financial projections suggesting that high-rise residential towers planned for Pier 6 were not necessary to sustain BBP finances.

The park staff issued a report at a meeting last month showing that when the park facilities are completed in 2018, recurring revenue from other development in the park would cover only $11.2 million of the $12.4 million operating budget. It said the new apartment buildings were “projected to fill remaining holes” in the financial plan.

But the plan’s opponents have issued a report saying the one-year snapshot was misleading because park revenue would grow sharply within a few years after that and produce surpluses.

Contrary to the suggestions made in your letter and statements made by the newly formed groups “Save Pier 6” and People for Green Space Foundation Inc., the Park has been consistently transparent and responsive to questions with respect to its financials.

As you know, there have been multiple public meetings convened by BBP on the Pier 6 development sites at which this information has been presented in detail. As discussed at these meetings, the BBP financial model does in fact account for the projected revenue generated by expiring tax abatements. As also discussed at these meetings, this increase will coincide with increased funding needed for both the maritime reserve and the capital reserve required to replace Park installations that will start to reach the end of their useful life and need replacement.

Urging the Brooklyn Bridge Park Corporation to “[p]roduce and make publicly available a written report analyzing environmental impacts” of proposed further development at Pier 6, the letter goes on to urge BBPC, among other requests, to “[b]egin a transparent process on Pier 6 respondents,” and to “provide, publicly, more detailed line-item spending.”