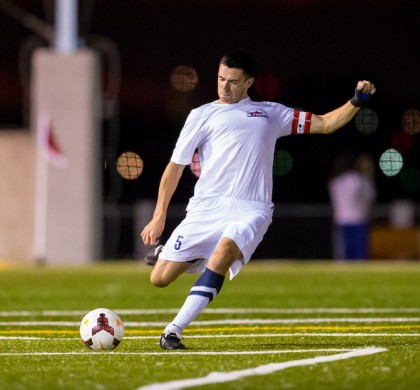 Gone is a majority of the offense that in 2013 powered the Terriers to a 12-6-1 record, most notably Kevin Correa, who transferred this summer to the University of New Mexico.

Correa, the Terrier’s leading scorer last year with 13 goals, was a third team All-American selection as well as Big Apple Soccer’s 2013 men’s college player of the year. The Queens-born senior was recently tabbed by the Missouri Athletic Club as one of 32 players on the club’s Hermann Trophy men’s watch list.

Although this represents a major blow for a St. Francis’ team that last year captured the attention of local fans, the Terrier’s head coach is realistic about his star player’s defection.

“We’re going to play a different style because of losing Correa,” said Giovatto, Big Apple Soccer’s 2013 Coach of the Year, “but we’re excited for the challenge. Everybody’s counting us out because he’s gone.”

As if losing a candidate for intercollegiate soccer’s most prestigious individual award wasn’t enough, the Terriers also lost their next two leading scorers, midfielders Gabriel Bagot and Viktor Bakkioui, to graduation.

Just like that the players responsible for 24 of St. Francis 31 goals scored in 2013 are no longer suiting up for the Terriers. No wonder SFC is picked to finish fifth in the NEC preseason coaches poll—and out of the NEC playoffs—a development which Coach Giovatto says has no bearing on how his team approached their season.

“We know those numbers don’t matter,” he stated flatly.

They certainly didn’t last year when the Terriers were picked to finish sixth. All SFC did was stun the conference by sweeping to the program’s fifth NEC title on the strength of Correa’s four tournament goals and an overtime tally by Andy Comack that gave St. Francis a 3-2 win over Bryant College in the NEC final.

Luckily, netminder Jack Binks and All-NEC defender and co-captain Comack, who were both named to the NEC All-Tournament team a year ago, return to anchor a strong SFC defense along with senior back and co-captain Riccardo Milano, who Giovatto called “an unbelievable defender.”

Players like junior midfielder Sal Barone will be key to ensuring that St. Francis relatively young squad (more than half are underclassmen) claims one of four NEC tournament spots.

“We have a good group of young guys from last year who didn’t get a lot of minutes,” said Giovatto. “We also brought in a couple of junior transfers; new guys with some experience who will hopefully get us back to where we were.”

Most notable of those additions are Philip Shafer, a 6-4 striker from Florida, who will be asked to supply some of the scoring lost to Correa’s transfer, and John Makaya, a 5-9 midfielder from Spain. Makaya is expected to provide the ball movement and midfield play that was essential to the Terriers’ recent success.

What will also give a boost to the returning Terriers is the experience gained from playing in the NCAA tournament.

“It’s huge,” said Giovatto, now in his eighth season at St. Francis. “They got that hunger [for success]. All the guys think about now is to get back to where they were [last season].”

“The feel like they’re the team to beat. They know everyone’s coming for them and they’re ready for the test.”

A repeat of last year’s home field advantage—where the Terriers compiled a 4-1-1 record—will also go a long way towards getting SFC back to the NEC tournament.

“It was incredible last year,” Giovatto said about the program’s move to Brooklyn Bridge Park’s Pier 5. “The support we got was just amazing. It makes the guys so excited to play there.”

St. Francis opens its home schedule on Tuesday, September 2, 7 p.m. at Brooklyn Bridge Park. The Terriers’ defense of their 2013 NEC title begins on Friday, October 10 in against Sacred Heart University in Fairfield, Connecticut.