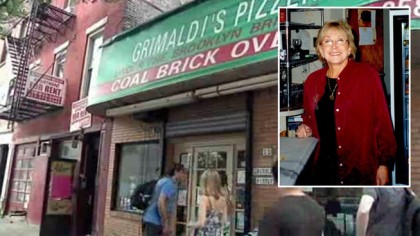 NBC New York reports that Grimaldi’s Pizzeria co-founder Carol Grimaldi has passed away at age 75 after battling cancer. In 1990 she co-founded the eatery with her husband, Patsy; it became so famous that lines stretched around the block daily. The couple eventually sold the business to retire, with new ownership moving Grimaldi’s a few feet away, although the Grimaldis eventually came out of retirement and opened Juliana’s in the old location. (You can read more about it here.)

Per the release sent out by Juliana’s Pizzeria, “Carol was a fixture near and dear to the many neighbors, frequent customers and vendors of Grimaldi’s and was a driving force behind the creation of Juliana’s.”