Who Needs Groundhogs? You Can Have Your Own Shadow! 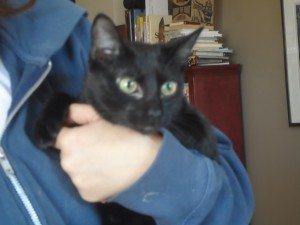 Like his namesake, Shadow is tough to capture, at least in a photograph; this 7-month-old wonder boy almost never stops moving, and posing for pictures is not his preference when there’s a whole world to explore and other cats to play with.

Part of a litter that was rescued in Sunnyside, Queens, this long-legged, silky, elegant bundle of feline curiosity is incredibly gentle and “a snuggler,” according to his Brooklyn Heights foster mother. Though tolerant of the occasional “smackdown” by his feline foster siblings, he won’t be a whipping boy, standing up for himself when necessary, and he loves the company of other felines. He will need to be adopted with one of his cat buddies or go to a home that already has a cat.

Shy at first with strangers, Shadow warms up quickly to the people who love him; his foster mother says that he’s constantly entwining himself in her legs or jumping on the bed for a cuddle.  A little patience as he gets used to you, and he’ll be devoted to you.

Though Shadow doesn’t have any experience with dogs, the good folks at Brooklyn Bridge Animal Welfare Coalition think that he’d be OK with a gentle, quiet canine.

If you’re interested in making sure that Shadow doesn’t have to go through six more weeks of not having a forever home, contact the BBAWC.

For more adoptable animals, check out BBAWC’s FB page, and  if you’re looking for a sweet dog to call your own, check out Bebe, last week’s featured pet of the week.