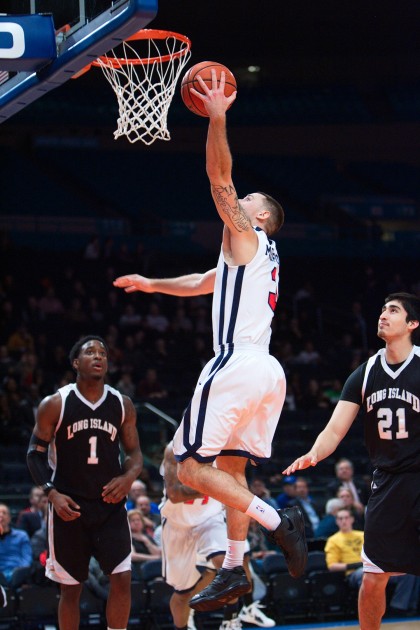 Finding Life Tougher At The Top, St. Francis Grinds Out a 74-71 win over Sacred Heart

By brooklynheightsblog on January 21, 2014 9:46 pm in Brooklyn Heights

Glenn Braica, head men’s basketball coach at St. Francis Brooklyn, understands how quickly perceptions change once a team goes from a conference afterthought to one of its best.

“I thought we had a chance to be a good team but it’s a very small margin between teams [in the Northeast Conference]” said Braica, adding “in this league you can finish tenth or first.”

Picked by rival coaches to finish seventh in the ten-team conference, the Terriers have been the surprise of the league, a half game behind first place Robert Morris (9-10; 4-0 NEC)

With senior guard Ben Mockford contributing a game-high 23 points, including a tie-breaking three-pointer with two minutes left, St. Francis (12-7; 3-1 NEC) remained near the top of the NEC, grinding out a 74-71 home win over cellar-dweller Sacred Heart (4-15; 1-3 NEC) last Saturday.

Junior forward Jalen Cannon added 16 hard-earned points, including 14 on the second half, to help St. Francis improve to 6-1 at home this season.,

Because of NEC parity, Braica was not surprised that the Pioneers came into the Pope Center primed to hang an upset on the high-flying Terriers.

“I thought they did a really good job of making the game be played the way they wanted it,” said Braica.

Sacred Heart has endured monumental change since last season, which ended abruptly with a 92-80 defeat to the Terriers, denying the Pioneers a NEC tournament berth.

Anthony Latina, Bike’s top assistant for eight season before becoming only the third head coach in program history, is meeting these challenges as best he can. Despite Gibson’s absence, the Pioneer offense continues to hum along at 71 points per game, thanks to freshman De’von Barnett and a trio of juniors: Chris Evans, Phil Gaetano and Steve Glowiak.

In a contentious first half, which featured plenty of pushing and shoving, the Terriers simply couldn’t shake the pesky Pioneers, even with Mockford a perfect 6 for 6 from behind the three-point arc. Every time the Terriers threatened to pull away, Sacred Heart would run them down, and the half ended 42-41 in favor of St. Francis.

Before panic could set in amongst the Terrier faithful, Mockford struck again, nailing his seventh three-pointer with less than two minutes left to give his team a lead they would not relinquish.

“We get a little extra energy when we’re in our home, where we’re a lot more comfortable,” said Mockford, enjoying his finest season in St. Francis’ red, white and blue. “We’re trying to defend our house this year and doing a good job of it.”

For Coach Braica, the key to a successful season is for his players to remain focused on what’s right in front of them.

“If you don’t prepare every game, you’re gonna get beat,” said Braica, 54-55 in his fourth season behind the Terrier bench. “You gotta try and keep their minds right because it’s human nature: you let up when you have a few wins and you can’t do that because you’ve got to remain hungry.“

Praising his team’s gritty performance, Braica identified why this may truly be a breakout season in Brooklyn Heights.

“You’re not gonna play great every night,” said the no-nonsense coach, “but these guys found a way to win.”