I bought my dog, Daisy, while I was on a trip and we’ve been flying ever since. Because so many people ask how I manage to travel with her, I’m sharing here what I’ve learned over the years.

Alaskan, American, Midwest, Northwest, United, and limited non-stop flights on U.S. Airways allow dogs over twenty pounds to fly as cargo or as a “checked bag”. They fly in a different hold than baggage, which is not acclimated like the cabin to compensate for the lack of oxygen and below-freezing temperatures of high altitudes. But there are major restrictions about the ground temperature, which has to be between 32 – 80 degrees unless your dog is veterinarian-certified for timed exposure to 20-degree weather. This makes dead of winter and the dog days of summer extremely difficult to ship your dog in – Daisy once had to stay behind in Montana for two weeks while we waited for heat waves to break there, in St. Paul-Minneapolis and in New York. 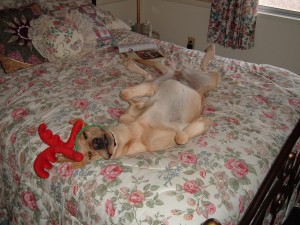 If you’re going to a major city in those seasons – especially a hub city – Continental and Delta have special programs in which your animal is not exposed to ground temperature. The destinations are limited though, so that when Daisy was a year old and we went to Montana, we flew Continental to Seattle, then rented a car and drove the 500 miles east.

These temperature-protected programs are expensive because the dog’s fare is based on its weight combined with the crate. Daisy and crate are about a hundred pounds or $375.00 each way. All dogs must fly with a health certificate but Continental requires that it be no more than ten days old, which means two veterinary visits. Add in car services and it’s easily a thousand-dollar proposition.

Jet Blue, U.S. Airways, and AirTran Airways allows a combined weight of dogs and carrier of 20 pounds as carry-on luggage, with the caveat that the carrier must fit under the seat and usually only one per customer.

All of these airlines require prior reservations but Continental and Delta at least have frequent flyer miles for animals flying cargo. Owners of short-nosed dogs that include Boston and bull terriers, English and French bulldogs, Shih Tzus and pugs, need to check out the airlines’ regulations because of hereditary respiratory problems.

Last, but not in our case, least, Southwest Airlines does not accept pets at all. It should also be noted that all airlines accommodate service dogs in-cabin.

“Maybe it’s just too stressful,” the owner of a border collie we’re friends with said of taking Zooey to California for Christmas, but I countered that when I’m going to go away for two or more weeks I know Daisy would rather be with me than avoid crating.

“If you done it, it ain’t bragging,” Walt Whitman wrote. Surely the bard of Brooklyn was right?

BHB columnist Frances Kuffel has lived in the Heights for twenty years. Her dog walking clients include Augie, Barley, Boomer, Faith, Gus, Henry, Hero, Panda, Roger and Zeke. For more information, visit http//franceskuffel.net, http://caronthehill.blogspot.com, or http://www.flickr.com/photos/kuffelscrapbook. She is the author of Passing for Thin.

airlines, Confessions of a Lab Lady