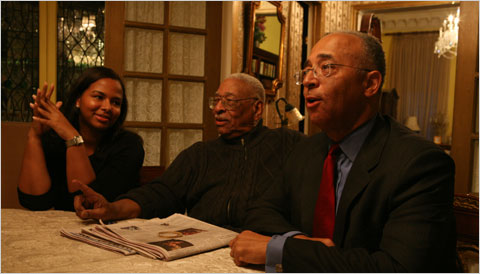 The New York Times’ Sam Roberts discusses the inauguration this week of Barack Obama with the Thompson family of Brooklyn Heights. The Thompsons have a long history of public service, including current NYC Comptroller and mayoral candidate Bill Thompson.  Download a podcast of the interview here.

New York Times: A Historic Moment…: Three generations of Thompsons gathered around the patriarch’s dining room table in Brooklyn Heights the other day and gave three varied perspectives on the inauguration of Barack Obama.

This prominent black political family from Brooklyn is headed by Harlem-born William C. Thompson. Known as Willie, he is 84 and served in a segregated infantry unit in Italy during World War II. His father worked for a furniture store, was a city marshal and remembered hearing Marcus Garvey preach his Back to Africa gospel on a Harlem street corner.

Willie Thompson is a former state senator — elected in 1964, the last time the Democrats controlled the Senate in Albany — a former City Council member and a state appellate judge.