21 Grace Court Alley Now Up For Sale After Being An $11.5k Monthly Rental

Tucked away on a private carriage house lane in the heart of Brooklyn Heights, this modern carriage house landmark has all the 19th Century charm the Heights is famous for, with the light, air and conveniences of the 21st Century. Drive in to a private parking potico at the end of the cul-de-sac, suitable for two vehicles.

From the portico, one enters the secluded lower level vestibule of the triplex. Adjoining the vestibule there is a very private two bedroom suite served by one bath along with a laundry room and access to the garden. The mid-level open plan living area looks out over gardens and is flooded with light from a large domed skylight.

The living room features a wood burning fireplace, which separates the adjoinging dining area. A well appointed chef’s kitchen features ‘Verdi’ marble counter tops and premium appliances including a double width Subzero, twin drawer Fisher Paykel dishwasher and a wine refrigerator. There is a half bath on this level and access to a covered porch for grilling and summer dining. The third level is used as a den/home office and opens to a roof terrace. This unique carriage house was constructed in 1994 by a noted Brooklyn architect with the blessing of the New York City Landmarks Commission.

The property is shown by appointment only. 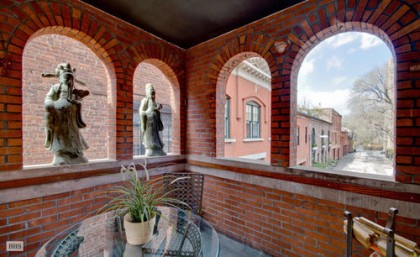 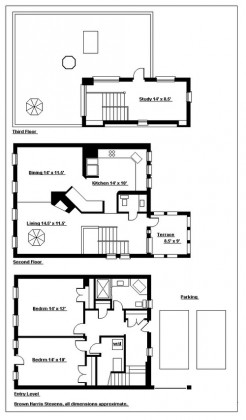 Publisher’s note: This post has been modified since original publication.