The Department of Transportation is moving forward with a plan to construct a greenway along the Brooklyn waterfront that would link the borough all the way from Bay Ridge to Greenpoint—including Brooklyn Heights along Brooklyn Bridge Park.

The Wall Street Journal reports that construction is scheduled to begin this summer in Red Hook. The completed pedestrian and bike way will run for 14 miles and eventually connect to Queens.

Preliminary plans for portions of the greenway have also been approved in Greenpoint and by the Brooklyn Navy Yard. The Red Hook portion would make the area more accessible to cyclists by extending existing Columbia Street bike lanes to a park near the Fairway grocery, while Van Brunt Street is also supposed to get bike lanes.

The project is slated with a $150 to $200 million price tag, funded by city agencies, private sources and federal funding. 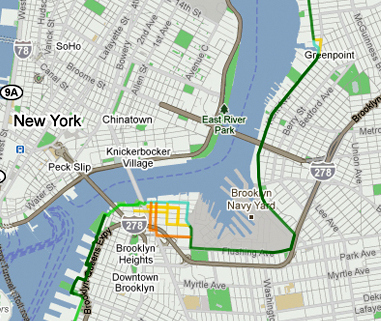