Supporters of Cobble Hill’s Long Island College Hospital (LICH) will march from Red Hook today, Sunday, April 7 at 1 p.m. to bring attention to the potential closure of the 150-year-old hospital. More info at Facebook. It is sponsored by Keep Brooklyn Hospitals Open for Care.

A rally preceding the march will take place in Red Hook at Coffey Park, 85 Richards Street, near the entrance on Dwight and Verona Streets. The march will proceed down Hicks Street and end at Long Island College Hospital at 339 Hicks Street.

Join Brooklyn patients, 1199SEIU, the New York State Nurses Association, doctors, elected leaders and community allies for a march and rally to save our hospital. We’ll kick off at Coffey Park in Red Hook and then march to LICH.

This week we won another victory in our campaign to keep LICH open for care: A judge granted a new temporary restraining order blocking the closure of LICH. We’re going to keep fighting for our hospital. Join us! 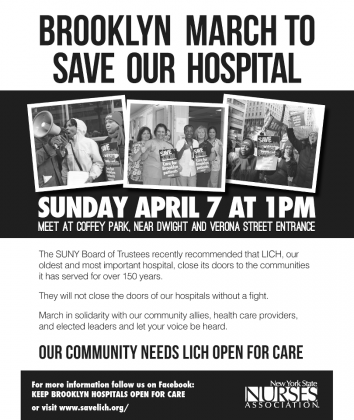