By Chuck Taylor on January 27, 2013 4:06 pm in Arts and Entertainment, Downtown Brooklyn, News

The UA Court Street Stadium 12 movie theater in Brooklyn Heights is about to lose its lock on the cineplex monopoly around town. Plans are confirmed for the 900-seat, seven-screen Alamo Drafthouse Cinema to open in 2015 in Downtown Brooklyn’s City Point. The upscale Austin-based biz is known for serving food & booze to theatergoers in their seats, offering indie & mainstream first-run movies, alongside repertory programming. Alamo has a strict no talking, no texting policy.

The theater will be built during Phase II of Fulton Mall’s mixed-use City Point development, which was updated this month with a new rendering from architects CookFox. The second phase also comprises two highrise residential rental towers (a 19-story with affordable housing & a 30-story market rate rental) and a permanent Market Hall selling fresh food and showcasing Brooklyn vendors.

City Point will be built in three phases. Phase I at One Dekalb was completed last fall. The second phase is expected to wrap in 2015, with Alamo Drafthouse Cinema as a primary anchor. It joins coming retail neighbors Armani Exchange, Century 21, H&M, TJ Maxx and Raymoor & Flanigan.

The theater chain currently has theaters in 10+ cities, including San Francisco, Denver and Houston; with plans to open locations on NYC’s Upper West Side and in Yonkers. The Brooklyn lease was first tipped by the Wall Street Journal in December. Charter Realty & Development brokered the 43,842/sf deal. 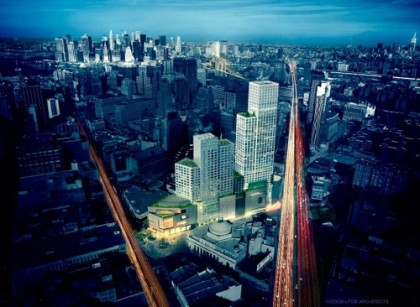