Brooklyn Bridge Park has issued a request for proposals to develop a waterfront residential complex along the DUMBO coast. A vacant lot on the north end of the park at John Street offers 9,600 square feet of develop-ready land just east of the Manhattan Bridge. According to BBP’s website, “It allows for up to 130 residential units comprising up to 101,000sf with a maximum height of 130 feet, up to 110 parking spaces and ground floor retail.”

The future John Street section of the park is about 1.5 acres and will serve as BBP’s northern entrance. It will eventually comprise a waterfront design, pedestrian bridges over a tidal salt marsh, tree-lined pathways and a 13,000sf public lawn. BBP will hold a site visit and information session January 23.

The site is currently owned by Consolidated Edison Company of New York, and will be acquired by Brooklyn Bridge Park Development Corp., who will then transfer control of the site to BBP. BBP expects to commence construction on this section of the park immediately upon acquiring the John Street lot and complete the build-out within a year. Requests call for “green elements,” flood protective measures and sensitivity “to the existing public space and community.” 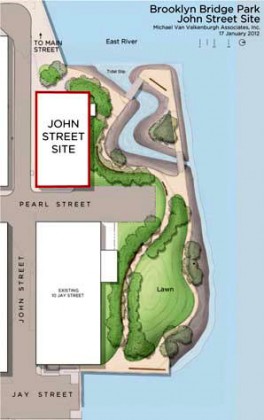