An official realtor website from developer Fortis Property Group has popped up for Brooklyn Heights’ condo project 30 Henry Street, deemed “The Heights,” at the former site of The Brooklyn Eagle. A new rendering of the exterior has also been made public, Brownstoner shares.

The Real Deal offers the goodies on what it terms “a new boutique Brooklyn Heights condo,” saying that it will hit the market in earnest “in the next few months.” The development features five large full-floor units asking between $3.39 million for a 2,418sf first-floor unit with three bedrooms to $4.95 million for a 2,861sf fifth-floor pad with additional exterior space. Construction on the BKSK Architects-designed building, which will have keyed elevator access to all apartments, is slated to be completed by the late summer.

Fortis President Joel Kestenbaum notes, “There’s a great shortage of supply in Brooklyn Heights and demand for big apartments is very strong.” Fortis purchased the development site for $3.5 million in April. The design of the prospective building was criticized earlier this year by community organizations that deemed it too tame. At the time, BHA Executive Director Judy Stanton told the Wall Street Journal, “If there was ever a site that cries out for something quite special and a district that deserves something quite special,” this would be it. 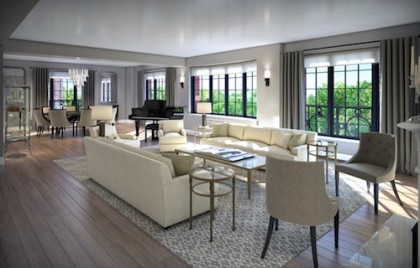