Publisher’s note: The following article is the sole opinion of Chuck Taylor and not of the Brooklyn Heights Blog, its publisher or Brooklyn Bugle Media. To be completely transparent, this post is NOT a “BHB Editorial” and I was as shocked as you when I read Chuck’s post. Truth is I can’t be online 24/7 and some contributors are permitted to publish live without my or Claude’s approval. We have worked very hard to build this blog and your respect along with it for the last 6 years. This post is in no way indicative of a “new” editorial direction and we apologize for any offense taken. I have modified the headline of this post since its original publication.

Eleven years after the gruesome events that took place September 11, 2001, it appears we’re going to continue to acknowledge 9/11 until the day we all die. This is perhaps the one occasion where I’d love to read nothing but nonsense about Justin Bieber’s hair. Along with the perpetual peeling off of the scab from a terrible event more than a decade ago, the endless political grandstanding, and the fact that we have yet to see One World Trade near completion… September 11 is a day I dread. 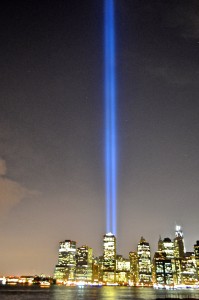 I was surprised Friday night as I walked along the Promenade to find this year’s “tribute” already in place, with the “Twin Tower” beams of light (albeit beautiful) beckoning the hemisphere… again. What happened to NYC Mayor Mike Bloomberg’s vow a year ago that after 10 years, it was time to let go of so many tirades to bring it all back into such clear focus over and over?

Like many of us in Brooklyn Heights, I saw the Twin Towers fall first-hand, from the rooftop of my apartment building. I am weary of watching them collapse one more time under the guise of “news” or “special reports” that bombard TV, print and the Web. My belief: It’s time to acknowledge quietly, privately.

For the tenth anniversary in 2011, in addition to the presence of Presidents Barack Obama and George Bush, New York Gov. Andrew Cuomo and New Jersey Gov. Chris Christie, as well as Bloomberg, there were 40-plus TV specials, complete with “investigations” of what 10-year-old children of 9/11 remembered (nothing) and profiles of the “unborn of 9/11,” which have nothing to do with the actual events of the day… all in an attempt to score rating$ and boost sensationalism.

Please, might we let the dead rest in peace—along with the rest of New York? Until we treat September 11 as a personal remembrance, sans the headlines and replays of photographs and video clips, America—and more so, New York—is forced to relive the past over and again. It is time to move on.

Is Apple Finally Gonna Take A Bite Out Of Brooklyn?
Law & Order: Cyclists Ignore Ban On Bikes Along Promenade