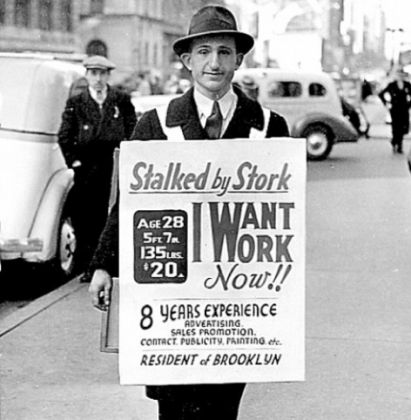 That makes this vintage photograph from April 1937 all the more relevant. The 28-year-old unemployed Brooklyn resident is showing great ambition wearing a sandwich sign around his neck, proclaiming he’s “Stalked by Stork.” That, of course, means a baby is on the way. He’s looking for work in advertising, sales promotion, contract publicity and the like.

After digging down deep into the Internet, I found “A Woman’s New York” column written by Alice Hughes on April 13, 1937. She reports:

New York’s sidewalks are filled with ladies and gentlemen carrying signs. They may advertise a cheap beauty parlor or they may announce that the bearer, an American citizen, spent 10 months in a German prison and is very mad about it. But I met my favorite the other day. A young man was wearing a ‘sandwich’ which read, in part, ‘Stalked by Stork. I want work now!’ The gallant young man carried his sign and (walked) out of my life, but I certainly hope he got a job, don’t you? That ‘Stalked By Stork’ is a punch line if ever there was one.’