The Brooklyn Bridge Park Corp. is expected to vote Tuesday June 19 on which developer will be awarded the contract to build the controversial BBP hotel and residential complex next to Pier 1 near DUMBO, as mandated by NYC Mayor Bloomberg to fund the future of the park.

Curbed refers to reports in The New York Times and Crain’s that favor Toll Brothers and Starwood Capital Group. Those companies have combined forces to offer a hotel comprising 200 rooms, with a 160-unit condo complex. There will also be 32,000 square feet of restaurant & banquet space, a 6,000-square-foot spa and 300 parking spaces. Under the development guidelines for the park, the hotel and connecting residences cannot exceed 100 feet in height, while a separate residential building can’t be more than 55 feet tall.

In addition, three more apartment buildings—one at John Street and two next to Pier 6—are planned for the park. The project, which would begin construction in 2013 and open in 2015, claims that it will generate $119.7 million in rent and other payments. It is conceivable that the multi-use residential and commercial complex will be complete long before the park itself. 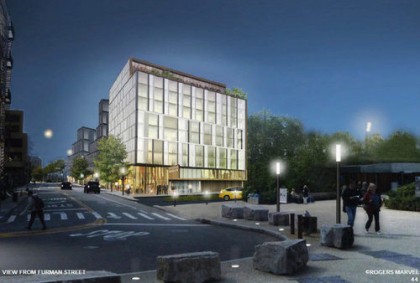 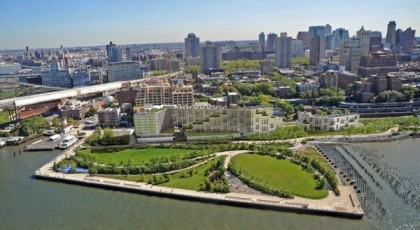