By Chuck Taylor on May 10, 2012 7:26 pm in Arts and Entertainment, Brooklyn Heights, Celebrity Residents, Events, Other Brooklyn

Barbra Streisand’s Brooklyn roots are certainly no secret. She was born & raised in the borough and graduated in 1959 from Erasmus Hall High School in Flatbush. However, she has not performed publicly in BK since then, some 53 years ago… until now. As the mainstream press has proclaimed, Babs, now 70, is returning home for a concert Thursday October 11, at the spanking new 19,000-seat Barclays Center.

Streisand said, “Brooklyn to me means the Loews Kings, Erasmus, the Yeshiva I went to, the Dodgers, Prospect Park, great Chinese food. I’m so glad I came from Brooklyn‚ down to earth. I guess you can come home again.”

Wonder if home will also mean a stop by the Brooklyn Heights Promenade, where she filmed scenes for 1974 film “For Pete’s Sake,” with Michael Sarrazin.

Tix for the Barclays concert range from $90 to $650, with $1,500 tickets available during pre-sale here. Barclays Center CEO Brett Yormark intimated that another night might be added, if tickets fly, as expected. The new Center opens September 28 with a concert by Brooklyn-born Jay-Z. Hmmm, somehow, I don’t think the venue will attract the same audience that night…

The Brooklyn-born and raised, world-acclaimed superstar will perform a concert on Thursday, October 11th, in Brooklyn at Barclays Center, the new 19,000-seat sports and entertainment venue.

Streisand will be making a triumphant return to her native borough. Raised in the Flatbush neighborhood and a graduate of Erasmus Hall High School, Streisand will perform publicly for the first time in Brooklyn.

Streisand stated, “Brooklyn to me means the Loews Kings, Erasmus, the Yeshiva I went to, the Dodgers, Prospect Park, great Chinese food. I’m so glad I came from Brooklyn‚ down to earth. I guess you CAN come home again.”

“When I first thought about building an arena in Brooklyn, I always envisioned Barbra Streisand coming home to take center-stage in her native borough,” said Barclays Center majority owner and developer Bruce Ratner. “It’s humbling and almost surreal to welcome arguably the greatest entertainer of all-time to Barclays Center. Barbra is Brooklyn and there’s nowhere more fitting for her to perform. This will be a night to remember.”

“I’m thrilled that all of America will be celebrating one of Brooklyn’s greatest contributions to the world of music, film, television and Broadway this fall when Barbra Streisand comes home to the exciting new Barclays Center,” said Brooklyn Borough President Marty Markowitz. “They just don’t get any bigger than this daughter of Brooklyn and proud graduate of Erasmus Hall High School, and although she has entertained millions upon millions across the globe for the better part of 50 years, Ms. Streisand will always find a home here in Brooklyn. So, no more tears, music fans‚ Brooklyn’s very own funny girl, Barbra Streisand, will create new memories as the main event this October at Barclays Center!”

“Barbra Streisand in Brooklyn will be a huge moment and a defining experience for Barclays Center,” said Barclays Center CEO Brett Yormark. “We are truly honored to bring Barbra full circle, to the borough where it all started for her, just down Flatbush Avenue from her old neighborhood. We are continuing our goal to bring the best of everything to Barclays Center. Brooklyn, after all, deserves nothing less.” 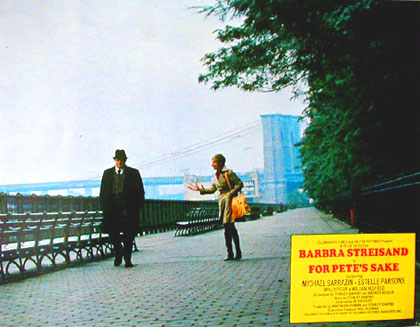