Filming For ‘People Kissing’ Friday On Clinton And Montague Streets

On top of filming for CBS-TV’s “Golden Boy” along Remsen Street & Montague Terrace Friday April 6, a second production will be shooting in Brooklyn Heights Friday. Atlantic Pictures is lensing French indie film “People Kissing.” The production company posted a notice along the east side of Clinton Street and on Montague Street above Henry Street, saying, “Please note that vehicles left on these streets after Friday, April 6, at 6 a.m. may be relocated to a block nearby.”

Atlantic Pictures offers a phone number if residents have concerns about deliveries, construction and accessibility needs: 917-771-3792.

The three-year-old Atlantic Pictures, owned by principals Darren Goldberg & Chris Marsh, develops, finances and produces original material and functions as a U.S. co-producer for international producers developing projects to shoot in the States. It most recently produced Gavin Weisen’s “The Art of Getting By,” starring Emma Roberts, Freddie Highmore, Rita Wilson, Alicia Silverstone and Blair Underwood. 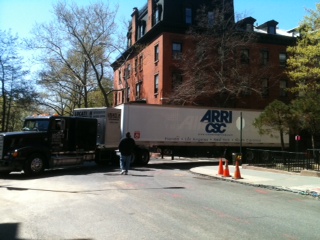 Judy Stanton, Executive Director of the Brooklyn Heights Association, sent us the photo above and this explanatory text:

This is one of the Bonanza Location Container trucks which parked on Remsen Street [in front of] 54. After I took this photo of it, unable to make the turn off Remsen onto Hicks. I watched it make a few attempts, with wheels of the cab up onto the Bossert’s sidewalk, barely missing the street lamp but I didn’t watch to see if it crushed the underlying catch basin. I think it’s longer than the legal NYC limit (55 feet) but, whatever its length is, it is too long to turn anywhere in the Heights. There is only way I think it can extract itself from Remsen Street which will be to go straight on Remsen, passing the 2 synagogues and church holding their Passover and Good Friday services, to get to Court Street where it may manage to turn.