Heights History: November 1903, The Day BAM Burned To The Ground

By Chuck Taylor on February 19, 2012 9:41 am in Architecture, Brooklyn Heights, History, Theater

As stagehands at the Brooklyn Academy of Music began preparing the opera hall for a banquet honoring Sen. Patrick Henry McCarren the morning of November 30, 1903, no one could have been prepared for the horrifying event about to take place at 176-194 Montague Street in Brooklyn Heights.

The week before, during Thanksgiving, BAM had staged William A. Brady’s “Way Down East,” and as the crew removed sets from “the beautiful pastoral play,” a small explosion occurred just offstage, most likely from a gas leak. In an instant, the scenery and canvas border ignited.

With a small water hose, stagehands attempted to extinguish the flames, as another charged up Montague to sound a fire alarm. But within minutes the 2,200-seat auditorium was engulfed and the ceiling began to collapse. Fire crews arrived within 10 minutes, but 20 minutes later, with a weak water supply and the Academy’s all-wooden interior, any hope of saving the structure was lost.

Meanwhile, surrounding buildings on Montague were beginning to catch fire, as well. A saloon next door was crushed by falling debris, while windows across the street shattered from the heat. Passersby dragged furniture and fixtures from nearby structures, while employees of a bank stashed as much cash as they could to transfer to another branch.

By the time the BAM blaze was extinguished, all that remained of the building—which held its opening performance January 16, 1861—were the front and back brick facades. One employee died by a collapsing wall. The cost of the damage, including surrounding buildings, was estimated at $237,000.

It took five years for the Academy to open at its current site in Fort Greene, at 30 Lafayette Avenue.

For dramatic footage of fire crews attempting the quell the flames, see video here. (The majority of information for this post was obtained from the BAM archives.) 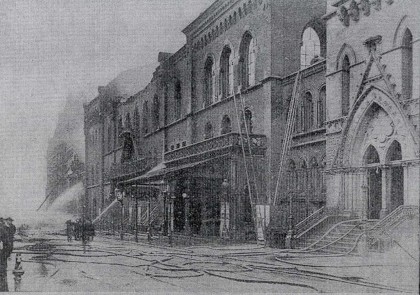