You might know that the Landmarks Preservation Commission hearing for the development at 27 Cranberry Street is scheduled for Tuesday afternoon (June 7).

I’m a neighbor (I live on the Hicks Street side of the block) and believe that the proposed building is far too massive for the Commission to determine that its size is “appropriate” for this block, which happens to have the single largest concentration of Federal-era wood-frame houses in all of New York City. These houses, almost 200 years old, are characterized by their modest size, and allowing this development — a single-family house that in fact is as large or larger than many of the multi-family apartment buildings on the block — at this location will significantly detract from the character that makes this part of the Brooklyn Heights Historic District special. 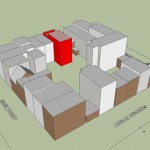 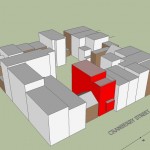 [Click on photo for larger version]
I’ve attached a few architectural renderings that show the oversize mass of this development. In particular, its intrusion into the core of the block (historic preservationists call it the “green donut” formed by the depths of the other buildings) is very noticeable.

I’ve also attached a Google SketchUp file with the complete 3D architectural model that lets you view the development and the surrounding houses from any angle. (Google SketchUp is a free 3D drawing program for Macs and PCs available at sketchup.google.com)