In case you’re one of the four people left in brownstone Brooklyn who has not been sold on the wonders of participating in a CSA, allow me to explain why these three letters are being clumped together, and why they are suddenly, strikingly hip.

CSA stands for Community Shared Agriculture—meaning that a community (hi, Brooklyn Heights!) literally shares agriculture from a local farm. For a period that generally runs from June until November, farmers bring their produce—fruits, vegetables, flowers, herbs, and, in some cases, cheese and meat—once a week to a site in the neighborhood for pickup. Members pay—up front—for full or half shares that vary in price, gather their package on the designated day, and are usually required to volunteer a few hours during the season at the distribution location.
Over the last few years, Brooklyn Heights has become home to two such organizations: Sweet Pea CSA, launched in 2008, and Brooklyn Bridge CSA, which kicked off last year. Sweet Pea gets most of its goods from Garden of Eve Farm in Riverhead, NY, and also works with High Point Farms in Ithaca, NY. Brooklyn Bridge sources its veggies from Sang Lee Farms in Peconic, NY, and its fruits and cheeses from other farms on the North Fork of Long Island.

Full disclosure: I joined the Brooklyn Bridge CSA a few weeks ago, mainly because Sweet Pea was sold out and I wanted to participate in this most sustainable of food practices before it goes out of style. (Just kidding! Sort of.) But further investigation into the world of CSAs—how they work, why the work, and what their message can be—showed me there’s more to this trend than leafy greens, ripe tomatoes, and juicy peaches.

“There’s some very obvious connections between a CSA and food justice,” Joelle Berman, one of the core group members of the Brooklyn Bridge CSA and a Brooklyn Heights resident, told me recently. “When you enter into a CSA, you are going in on a risk with the farmer, and you’re really taking out all of the middlemen that typically make decisions for you about the nutrients you get, and how you eat, and when you eat.”

Therein lies the justice: by getting food directly from the farmer, every member of the CSA exerts greater control over their food supply by no longer relying on faceless multinational companies. “We need to learn to take it very personally,” Berman insisted. “Because we’re actually trusting our health to people who aren’t very deserving of that trust.” 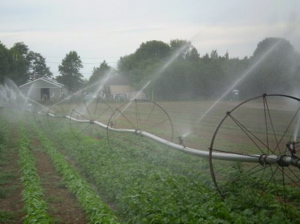 What’s more, Berman explained that CSA shareholders learn how to “live with the season” by eating what is fresh “at that moment.” She elaborated, “You will never taste vegetables the same again, when you taste them as they’re meant to taste, at the time they’re picked.” Supermarket vegetables, by contrast, are normally picked weeks before they are purchased and consumed, and often ripen on the way to the store.

Brooklyn Bridge CSA, a joint project of the Jewish social justice organizations Pursue and Hazon, distributes its provisions at Congregation Mt. Sinai. Sweet Pea members pick up their produce at the First Unitarian Church in Brooklyn Heights, which supports them and helped the initial members get the CSA off the ground. Both CSAs donate leftover and unclaimed food to nearby pantries, and are run entirely by unpaid volunteers.

“My hope is that it will create a shift in the market,” Julia Bender, a core group member of the Sweet Pea CSA who lives in Brooklyn Heights, said. Meaning, essentially, that as more people turn to CSAs for their fruits and vegetables, supermarket owners will be forced to reconsider what’s on their shelves.

Though tiny Brooklyn Heights is flush with two CSAs, and nearby DUMBO, Cobble Hill, Carroll Gardens and Red Hook have a few of their own, the notion that food from a local farm could be delivered to a community remains exotic in far-flung locations like…Downtown Brooklyn. Part of a CSA’s mission can be to spread the gospel.

“Besides housing, in Brooklyn especially, one of the most glaring differences in neighborhoods is insufficient produce,” Berman said, referring to these regions as “food deserts.” Brooklyn Bridge CSA offers “sponsor” and “low income” shares, with the idea that if some people pay more for their shares, other, less affluent folks can participate in the CSA at a lower rate.

“Even though this is probably the most fundamental way to get your food, and has been since the beginning of agriculture, it’s actually very difficult to explain what this is to people,” Berman said of the way CSAs work. “And especially to explain the value of it to people who don’t even normally have access to fresh food, and might not understand what is inherently valuable about getting something local, and getting something that is not just from a major supermarket chain.” 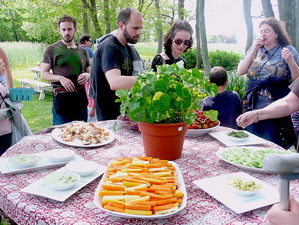 Aside from food justice and doing good by local farmers, CSAs are also a vehicle for communities to come together and have some good old-fashioned fun. Both CSAs hold cooking demonstrations and educational events for members, and send out newsletters with tips and recipe suggestions. One of the more daunting—or, depending how you look at it, more exciting—aspects of belonging to a CSA is not knowing exactly what the farm’s bounty will be week in and week out.

“It can be a real challenge sometimes,” Berman admitted. “How do I use four heads of lettuce, and random colored carrots, and 50 other things?”

Though the prospect of having no idea what will appear in their fridge intimidates some people, Berman believes joining a CSA is actually easier than going food shopping. “You start to realize you were never supposed to choose,” she said. “Earth chooses for you.”

Alright, Earth. Let’s do this.