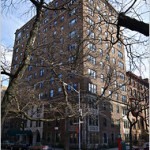 In this weekend’s real estate section of the NYTimes, the ” ‘It’ Buildings of the Other Boroughs ” were considered and a noted Brooklyn Heights address was mentioned first.

NYTimes: Wealthy Brooklyn residents have long gravitated toward Brooklyn Heights, with its views of — and close proximity to — lower Manhattan. The most coveted co-op in the neighborhood, according to residents, brokers and local officials, is One Pierrepont Street, built in 1925.

As it has just 25 units, generally two per floor, sales are rare in the understated 12-story building. An 11th-floor three-bedroom sold earlier this year for $3.5 million, city records show; that makes it among the area’s priciest co-ops. Mortgages are allowed, but only for half the purchase price, brokers familiar with the building said.

One Pierrepont is known for its pristine condition; brown-brick exterior walls dotted with terra-cotta clovers; and a rare side yard whose lawn, behind an elegant iron fence, provides a secluded place to sit in an already sedate corner of the city. A rooftop solarium with a fireplace offers another spot to relax.

And in the tradition of the finest Manhattan co-ops, the lobby, with two stout eight-sided columns, seems dimly lighted on purpose, perhaps to allow residents to duck in and out unobtrusively.

“Buyers know that it is maintained impeccably, and that makes it attractive,” said Sandra Dowling, the principal of Brooklyn Heights Real Estate.