Brooklyn Fashion Unzipped by Shop it To Me: What is Brooklyn Heights Wearing?

Among many traits, like being hipper than everybody else at all times, Brooklyn is known for its progressiveness, with bars, restaurants, and clothing brands latching on to the borough’s certain coolness as a way to define their style. But Shop It To Me, the website that thinks of itself as an online personal shopper, recently sought to define Brooklyn’s style in a more literal way, using a system they have already implemented in cities like Chicago, Los Angeles, Manhattan and San Francisco.

“Brooklyn is in our top ten cities of where our members reside,” Tamra Feldman, Shop It To Me’s director of marketing, told me. “We thought coming off fashion week and all the excitement about fashion in New York, it would be fun to do a Brooklyn profile.”

By “profile,” Feldman means taking the information Shop It To Me has collected about its Brooklyn-based members and using it to decipher which brands they buy most while shopping online. It’s an experience Shop It To Me has streamlined for users by showing them just the fashion brands they care about, in their size, and sending e-mails—daily, weekly, or monthly—when those brands go on sale.  More then 150 retailers participate, including large chains like Banana Republic, J.Crew, Saks, Neiman Marcus, and Bloomingdales, and online boutiques like Shopbop and Bluefly.

So, how does Brooklyn dress? Using just their top 60 featured brands to filter the information, Shop It To Me found that, as a group, Brooklynites prefer DKNY, Prada, and Marc Jacobs above all else. As for inhabitants of 11201, we shop online most at Cole Haan, Theory, Nanette Lepore, and Elie Tahari, which surprised Feldman, a Brooklyn Heights resident, if for no other reason than it was so darn stereotypical. 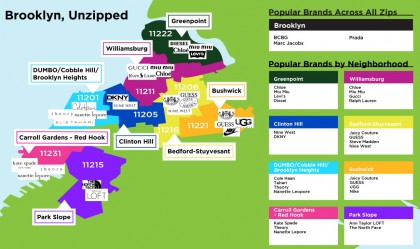 “I expected for [the profile] to squash that, or show something so different,” she said of the so-called “career” brands we Heights dwellers apparently adore. Feldman added, “I wouldn’t say that our fashion sense in this neighborhood is amazing, but I think it’s very comfortable. I think people dress appropriately, that there is less focus on being flashy, or being so individual or unique. But there is a focus on being clean, on having an appropriate appearance.”

Other areas, like Park Slope, showed an affinity for North Face and Ann Taylor Loft. “I expected something more like a Free People, or something more independent in nature,” Feldman admitted.

What is perhaps most notable about the survey is its lack of brand diversity in the city’s second most diverse borough. Greenpointers and Williamsburgers alike love them some Miu Miu; residents of Clinton Hill and Bed-Stuy are particular to Nine West; and Carroll Gardens is as into Nanette Lepore and Theory as we are. Some of the profile’s watered-down feel can be attributed it including just 60 brands, but Feldman thinks another factor might be at play.

“When people are shopping online, they gravitate to more mainstream brands because they know their sizes, and they’re more comfortable shopping that way,” she said. As for the profile showing results from just eight of Brooklyn’s more than 30 zip codes, Feldman noted the profile was never meant to be an exhaustive look at every single neighborhood, only the ones where Shop It To Me has the most members.

Feldman and her husband moved across the country just a few months ago, and decided to settle in Brooklyn Heights because, well, there was just something about it that felt like home. “The pace of life is a bit calmer, but there’s still accessibility to Manhattan, and to great restaurants,” she said. And while she was quick to extol the region’s charm and beauty, Feldman was just as quick to decry the glaring lack of small, independent boutiques on our streets.

“Tango is great, but they’re the only one,” she said, referring to the Montague Street establishment. “I would love it if there could be a handful more stores like that.”

Mr. J. Goes Around the Heights
Can’t Get a Cab to Brooklyn? “Destination Discrimination” Priority for TLC