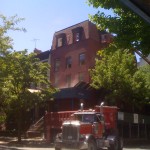 The Brooklyn Eagle sheds some interesting light on the demolition of 100 Clark Street. According to the report published today, the DOB had decided that the entire structure, not just the top two floors as originally announced, needed to be taken down. Current owners, the Penson Companies went to court to stop the DOB from tearing the entire building down. As a result, the Eagle says, a stop work order has been issued.

Let’s hope that Penson’s plan is to resurrect and restore this landmark building.