Himalayas on Cranberry and Hicks 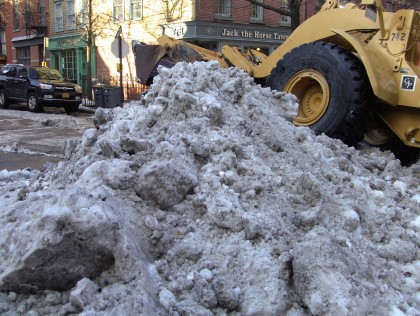 Snow is being piled into a heaping mound to make way for filming next week around Cranberry and Hicks. According to the sign, the film/TV show/commercial in question is called “IDK”. I don’t know if that means it’s called IDK or the producers don’t have a name yet. Either way, the kids are loving it.

Update: The filming will be for a movie called I Don’t Know How She Does It starring Sarah Jessica Parker, Greg Kinnear, Olivia Munn, Seth Meyers, Kelsey Grammer, Christina Hendricks, Jane Curtin and Pierce Brosnan. Mr. Remington Steele was last seen here in 2009 shooting the forgettable Remember Me. (Update: We’ve just learned that Brosnan will not be here, he wraps his work on the movie this week. However we’ve confirmed that Mr. Talk Soup Greg Kinnear wil be in Brooklyn Heights to film.)