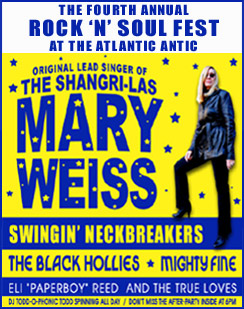 Besides wearing out many Beatles 45s back in the day, a certain diaper wearing future blog publisher was known for his manic obsession with the 60s girl group The Shangri-Las. This Sunday as part of the annual Atlantic Antic street festival, our pals at Magnetic Field present one of the original Shangri-Las, Mary Weiss, in concert. Weiss' new album, Dangerous Game is out now on Norton Records. The outdoor show (on a big stage right outside the bar at 97 Atlantic Avenue) goes from 11AM – 6PM and also features the Swingin' Neckbreakers, The Black Hollies, Mighty Fine (another Fink fave featuring Afghan Whigs/Twilight Singers co-hort Steve Meyers) and Eli "Paperboy" Reed and the True Loves.

Inside Magnetic Field at 6PM, Gabby Glaser (Luscious Jackson)  hits the stage. The Nouvellas with ex-members of the Dansettes are also on the bill.

And now some lovely videos from some of the bands playing on Sunday: