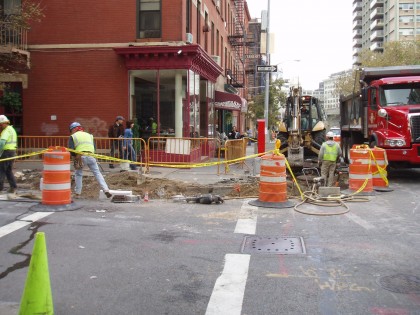 Construction workers have taken to Henry Street to install “neckdowns” as part of a “traffic calming” project to make the street more pedestrian-friendly.

Work is nearing completion on the corner of Henry and Middagh streets, but was in full swing on the corner of Cranberry and Henry streets today. Eventually, the neckdowns will be added along Henry Street all the way to Atlantic Avenue.

The “neckdowns,” which extend the sidewalk at the corner of an intersection, are being installed to make it easier for pedestrians to cross the street by making the crossing distance shorter. Additionally, they will also serve to slow traffic.

The road work is the result of a report that served to classify local streets into three categories: travel, community and living. The “neckdowns” are being added to streets classified as living streets, or streets that “provide access to living or working spaces. Living Streets are the local, typically residential streets where quality of life is the primary concern,” the report said. Additionally, living streets should have lower traffic volumes.

Although it was originally scheduled to take place in three phases, the work has been consolodated to two phases — phase one is happening this year and phase two will begin next summer, said Rob Perris, district manager of Community Board 2. 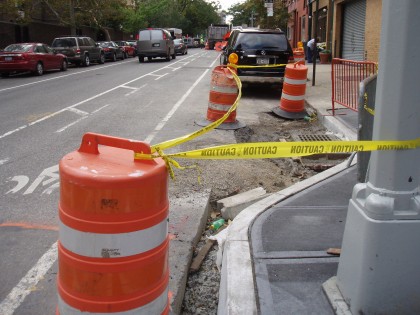 An example of a "neckdown" on the corner of Henry and Middagh streets. (BHB/Thomas Garry)

Below is a list of intersections that will be worked on as part of the project: