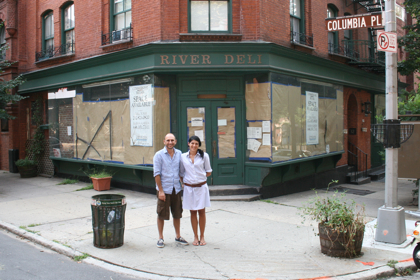 BHB caught up with Andrea Mocci and Giovanna Fadda yesterday, who are the new leaseholders at the former River Deli at 34 Columbia Place, at the base of Joralemon Street. The couple, who moved to New York from Sardinia nearly three years ago, hopes to open an Italian restaurant or café in the spot by mid-October.

The pair has applied for a liquor license, but Mocci noted that he doesn’t plan to open a loud bar, as neighbors sometimes fear.

“It won’t be a noisy bar — it’s not our intention to have that,” he said. “We’d like to serve some good food.”

Mocci and Fadda first found the long-empty space two years ago when they spent weekends at the temporary pool off Pier 5, and realized it would be the perfect spot for a restaurant. Fadda is currently the manager of a wine bar on Mott Street in Manhattan.

According to their liquor license application, which was approved in June by Community Board 2, the restaurant will be open for dinner until midnight on Sunday through Thursday, and 1 am on Friday and Saturday, and be open for brunch on Saturday and Sunday. They hope to have an outdoor seating area, and will sound proof the ceiling, Fadda told CB2.